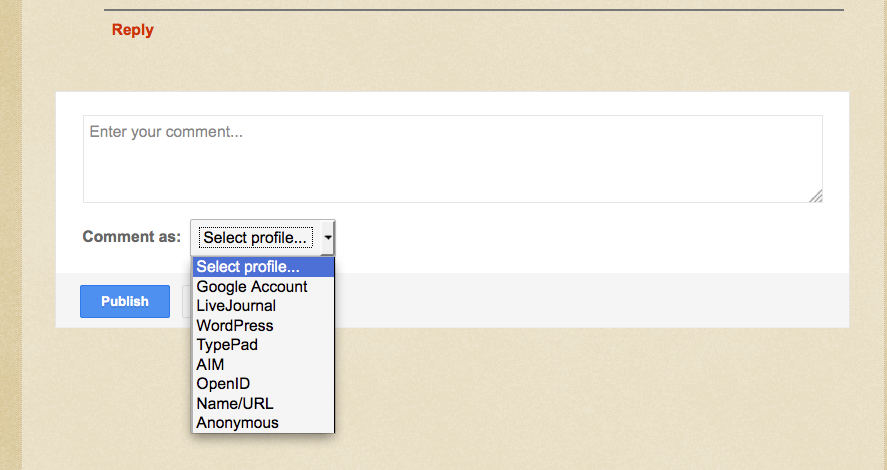 I've received emails from readers intermittently over the years, complaining that their efforts to leave a comment on TYWKIWDBI were thwarted by some cybersnafu.  I didn't have a good explanation for them.  But this past week the problem has happened to me several times when I was writing responses to other comments, and I realized it only happened under certain circumstances...

The commenting system allows one to sign in through a variety of profiles, or to do so anonymously.  Every time I've had my comment "vaporize", it occurred when I wrote the comment first and THEN went to the pull-down menu to sign in.  The system took me to the sign-in menu (for Google in my case), and after I signed in as Minnesotastan it returned me to the commenting area - but the comment was gone.  Long, detailed comments with links in several cases, which was so frustrating I yelled at the computer.

But now I know why it happens - for me at least.  I don't know if this happens with other sign-in profiles/ operating systems/ browser combinations.  I don't think it's a peculiarity of the way I have this blog set up.  I think it's a systemic fault.

If you sign in first, this problem should not occur.  But it might be a good idea - commenting on this blog or others, that when you write a long detailed comment, copy it first before hitting the "publish" button, so that if it is eaten you can quickly try again.

Addendum:  I received the following information from a frustrated reader in Sweden:


For the longest time now though I have not been able to post comments, and it has annoyed me to no end.

After getting a job as a whatever-do-web-stuff-person I've learned a few things, and I checked the console when trying to post and saw that I got a whole lot of cross-domain errors. This results in all my form submissions to vanish into thin air, to much despair.

What causes this is that Blogspot, which resides on .com, automatically forwards me, who is in Sweden, to .se which breaks the comment form due to different top domains. Right now I would probably have to access the site by a proxy to be able to post.

See the rest of his comment (and other useful ones) in the comments below.  At the present time I'm reluctant to try to correct this by altering TYWKIWDBI's template, but I'll consider this while awaiting other feedback and comments.