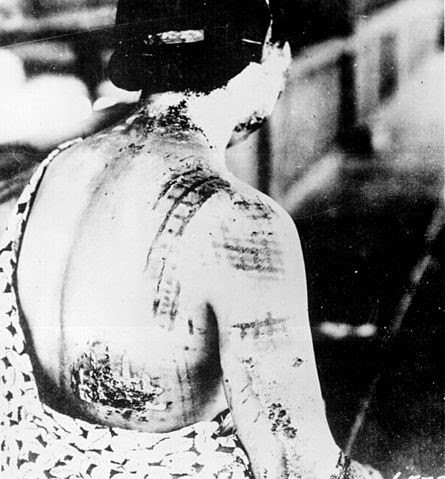 I was startled to see this photo of a Hiroshima victim in a book I read recently about the Manhattan Project.  The Wikipedia entry on effects of nuclear explosions reads as follows:


Burns visible on a woman in Hiroshima during the blast, darker colors of her kimono at the time of detonation correspond to clearly visible burns on skin touching parts of the garment exposed to thermal radiation. Since kimonos are not form fitting attire, some parts were not directly touching her skin are visible as breaks in the pattern.

It took me a moment to realize that the burns in the photo are not radiation burns (which would never be affected by clothing), but thermal ones.  Still, it's startling to see the degree to which the color of fabric affects the transmission of heat.


When thermal radiation strikes an object, part will be reflected, part transmitted, and the rest absorbed. The fraction that is absorbed depends on the nature and colour of the material. A thin material may transmit a lot. A light colored object may reflect much of the incident radiation and thus escape damage. The absorbed thermal radiation raises the temperature of the surface and results in scorching, charring, and burning of wood, paper, fabrics, etc. If the material is a poor thermal conductor, the heat is confined to the surface of the material.