Getting to the root of perennial grains

Ever since my childhood in the Upper Midwest, I've understood that one of the factors leading to the great "Dust Bowl" disaster of the 1930s was the destruction of the native grasslands by farmers.  But it takes an image to really drive it home - such as the one above comparing the root systems of a perennial wheatgrass with those of modern annual winter wheat.  A National Geographic article explains that humans have always favored annuals over perennials because the short lifespans promote selective breeding:


Humans made an unwitting but fateful choice 10,000 years ago as we started cultivating wild plants: We chose annuals. All the grains that feed billions of people today—wheat, rice, corn, and so on—come from annual plants, which sprout from seeds, produce new seeds, and die every year. "The whole world is mostly perennials," says USDA geneticist Edward Buckler, who studies corn at Cornell University. "So why did we domesticate annuals?" Not because annuals were better, he says, but because Neolithic farmers rapidly made them better—enlarging their seeds, for instance, by replanting the ones from thriving plants, year after year. Perennials didn't benefit from that kind of selective breeding, because they don't need to be replanted. Their natural advantage became a handicap. They became the road not taken.

We pay a steep price for our reliance on high yields and shallow roots, says soil scientist—and National Geographic emerging explorer—Jerry Glover of the Land Institute. Because annual root crops mostly tap into only the top foot or so of soil, that layer gets depleted, forcing farmers to rely on large amounts of fertilizers to maintain high yields. Often less than half the fertilizer in the Midwest gets taken up by crops; much of it washes into the Gulf of Mexico, where it fertilizes algae blooms that cause a vast dead zone around the mouth of the Mississippi. Annuals also promote heavy use of pesticides or tillage because they leave the ground bare much of the year. That allows weeds to invade.

The article goes on to explain that scientists are aggressively pursuing the concept of creating deep-rooted perennials that can serve as food plants.  This topic was considered in greater depth in Discover Magazine last spring:


Now we also have much better tools in plant breeding. We have much more powerful, faster computers that allow us to sift through the genetic material to determine which characteristics are going to be more productive...

I recommend focusing first on the perennial types of legumes, given the protein needs of many of the developing countries. The great benefit is that legumes contribute to cropping systems; they can help take nitrogen out of the atmosphere and make it available in the soil.

African soils were in general less fertile and less well-suited for agricultural production than American soils from the beginning. Farmers in Africa are often faced by the big challenge of working with inherently old, highly weathered soil...  I think ultimately they could be more productive than our annual grain crops because they are able to capture more sunlight, water and nutrients. But the urgency in developed countries isn’t there. 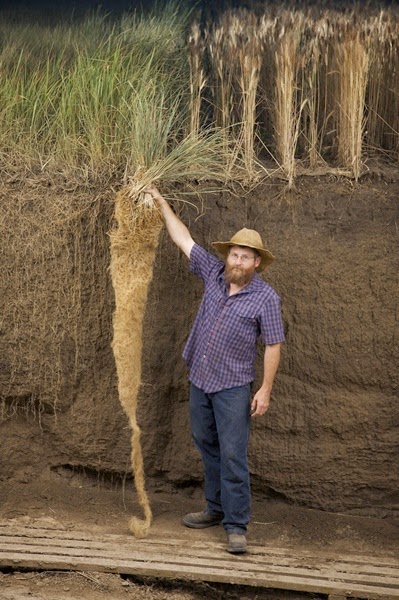