I first posted this video several years ago, but I find it to be endlessly fascinating.  A hat tip to 22 words for reminding me.

Addendum:  And a hat tip to several readers for pointing out that this diving skill has some intriguing scientific roots, nicely summarized at one of my favorite science blogs, Not Exactly Rocket Science:


Jaroslav Červený has found that when red foxes pounce, they mostly jump in a north-easterly direction. He thinks that they’re using the Earth’s magnetic field to hunt.

Červený spent over two years studying wild red foxes in the Czech Republic, with the help of a 23-strong team of wildlife biologists and experienced hunters. The team recorded almost 600 mousing jumps, performed by 84 foxes at a wide variety of locations and times.

They found that foxes strongly prefer to jump in a north-easterly direction, around 20 degrees off from magnetic north. This fixed heading was important for their success as hunters. They were more likely to make a kill if they jumped along their preferred axis, particularly if their prey was hidden by high cover or snow. If they pounced to the north-east, they killed on 73% of their attacks; if they jumped in the opposite direction, they success rate stayed at 60%. In all other directions, only 18% of their pounces were successful...

This totally fascinating ability is discussed in more detail at the link, and illustrated here - 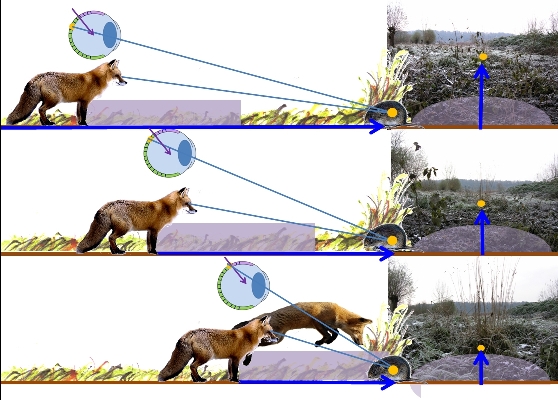 - from an article in Nature.  Evolution is so amazing.

Reposted from 2011 to add this video of a domestic dog pouncing the shadow of a bouncing baby: