When you need an excuse to slap someone... 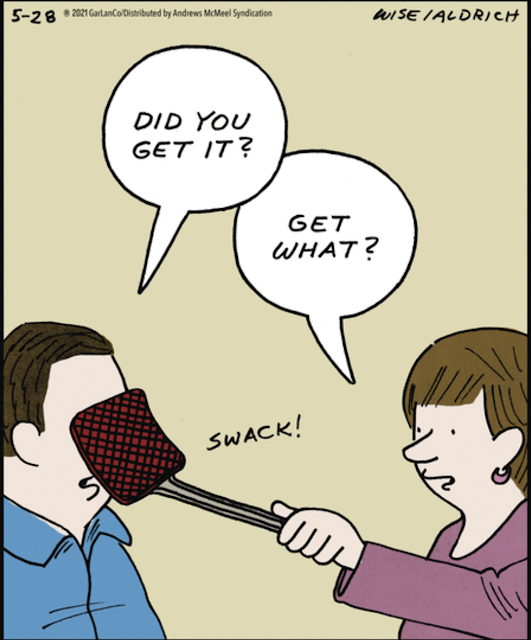 Congressman asks if the U.S. Forest Service could alter the orbits of the moon - or the earth... 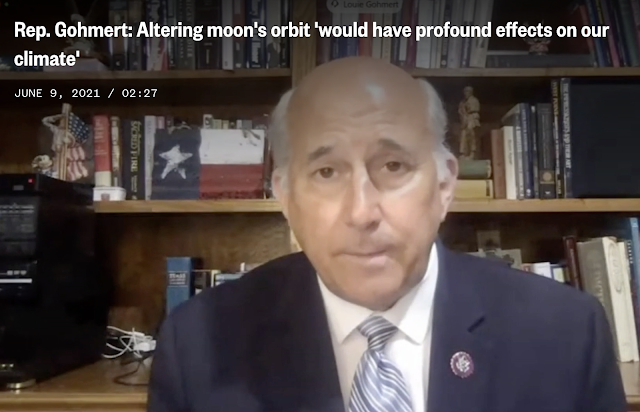 This man was elected to Congress to represent voters in the state of Texas.

Rep. Louie Gohmert, R-Texas, suggested at a congressional hearing that climate change could be combatted by altering the orbit of the moon and asked a U.S. Forest Service official whether there was any way the agency could do it.
Gohmert made the comments Tuesday during a House Natural Resources Committee hearing on four bills as he was questioning Jennifer Eberlien, an associate deputy chief of the Forest Service.
"I understand, from what's been testified to the Forest Service and the BLM, you want very much to work on the issue of climate change," Gohmert said, referring to the Bureau of Land Management.
"I was informed by the immediate past director of NASA that they've found that the moon's orbit is changing slightly and so is the Earth's orbit around the sun. We know there's been significant solar flare activity," he said. "And so, is there anything that the National Forest Service or BLM can do to change the course of the moon's orbit or the Earth's orbit around the sun? Obviously, that would have profound effects on our climate."

In the video at NBC News you can listen to him actually propound this insane question.
This question is not just a reflection of massive stupidity about planetary engineering.  It is an outgrowth of theories emphasized during the Trump administration that climate change is a natural phenomenon rather than a man-made catastrophe.  The rebuttal by NASA re the time frame of cosmic planetary cycles is discussed at the link.
No comments: 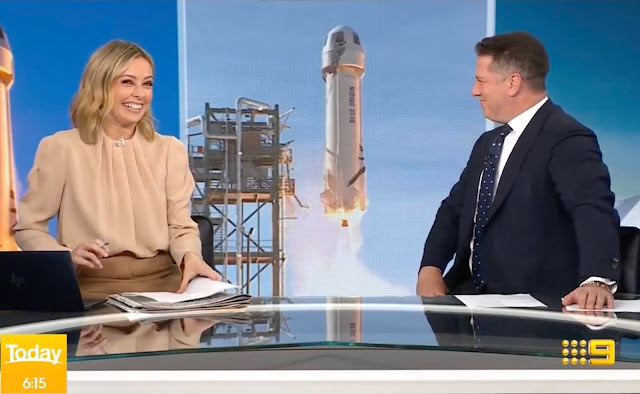 Video of the gigglefest by the broadcast reporters at BoingBoing.
No comments: 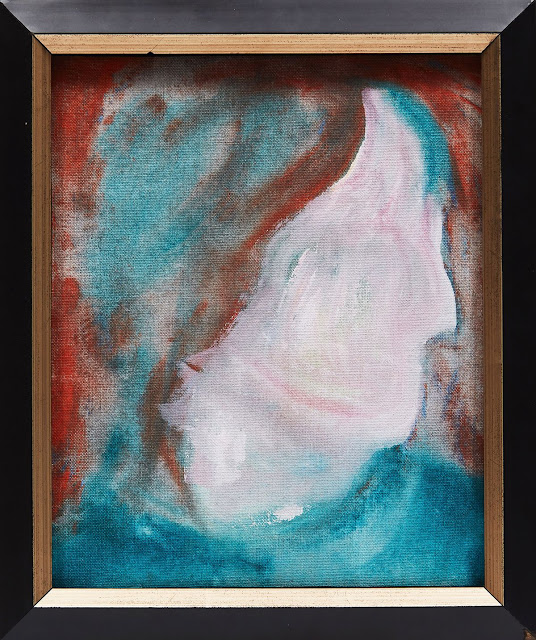 "A painting by David Bowie purchased last summer at a donation centre in rural Ontario for $5 is expected to fetch upward of $12,000 at auction this coming week. The semi-abstract portrait by the Changes singer is a small acrylic and computer collage on canvas, dated 1997, with Bowie’s signature on the reverse.
The painting is titled DHead XLVI. It was found in a Goodwill shop in South River, Ont., a village some three hours north of Toronto. The identity of the portrait subject is unknown, and the name of the painting’s owner has not been revealed.

Via BoingBoing.
No comments: 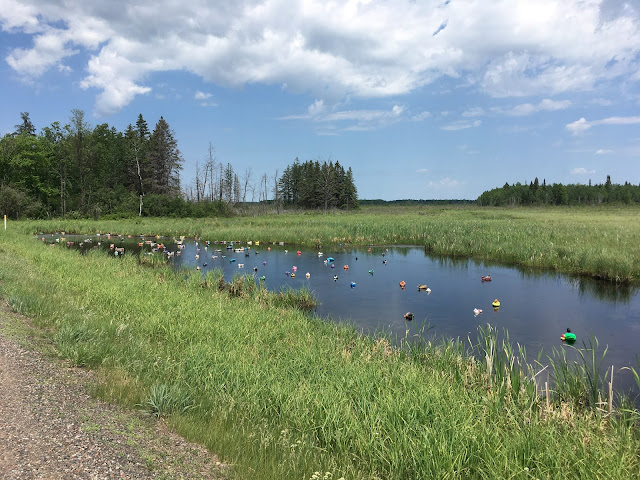 I first discovered and blogged about a drainage ditch with duck decoys (Google Maps location) back in 2018, then wrote a followup post in 2019.  After a pandemic year interval, I headed north again this month, and found a huge increase in the number of painted decoys (photo above).
There was no town nearby in which to make inquiries, so I had to wait until getting back from my vacation - but then I was rewarded with the discovery of a Minnesota television station's report on this phenomenon.  The video is done in the style of Steve Hartman's "On the Road" segments for CBS News.  This turns out not to be an "art installation" - let's just call it a "whimsy."
I'm creating this post first so that it will be the last one you encounter on your visit to TYWKIWDBI today, and I invite you to take 3 minutes to watch this video report.  I guarantee it will be the most cheerful item you encounter on the internet today.
No comments: 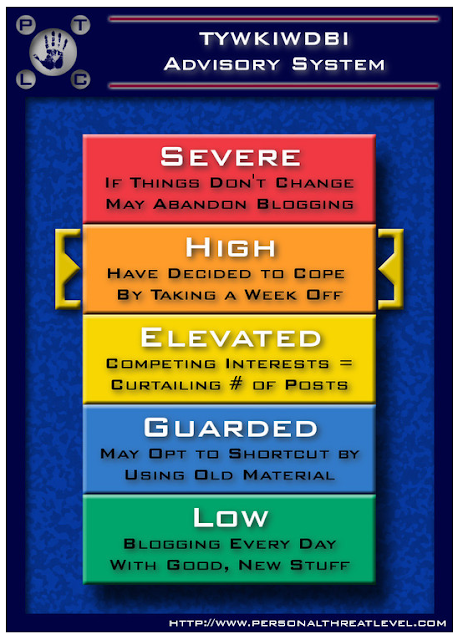 I'm going to leave cyberspace for at least a week - probably two - to see what's happening in real life.
7 comments: 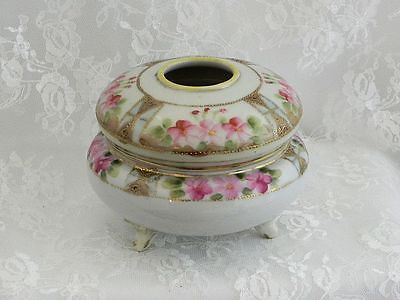 I saw a group of these in a local auction and had to look up some information:


Although rare today, the hair receiver was a common fixture on the dressing tables of women from Victorian times to the early decades of the 20th century. Its purpose was to save hair culled from the hairbrush and comb, which were used vigorously on a daily basis. The hair could then be stuffed into pincushions or pillows. Since hair was not washed as often as it is today, oils were frequently used to add scent and shine to hair. The residual oil made the hair an ideal stuffing for pincushions because it lubricated the pins, making it easier for them to pierce material. Small pillows could be stuffed with hair, which was less prickly than pinfeathers.

But possibly most important, hair receivers made the creation of ratts possible. A ratt (sometimes spelled rat) is a small ball of hair that was inserted into a hairstyle to add volume and fullness. The ratt was made by stuffing a sheer hairnet until it was about the size of a potato and then sewing it shut.

The word "ratt" as a Victorian term for a hairdo enhancer is interesting because decades ago I remember girls "ratting" their hair with combs to give the hairdo greater size; IIRC it was a back-and-forth motion, but no hair extensions or padding was involved.  I presume the words are distantly related in terms of etymology. 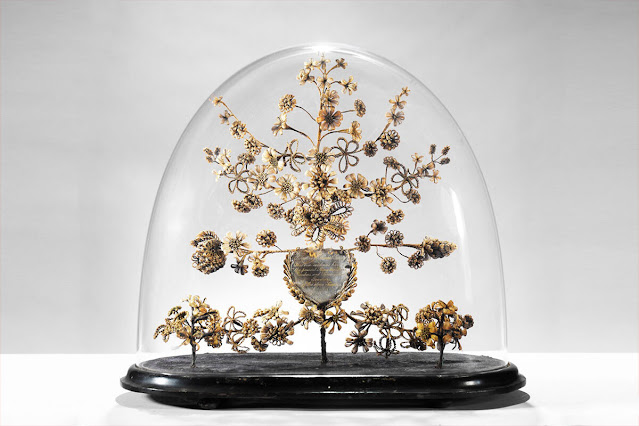 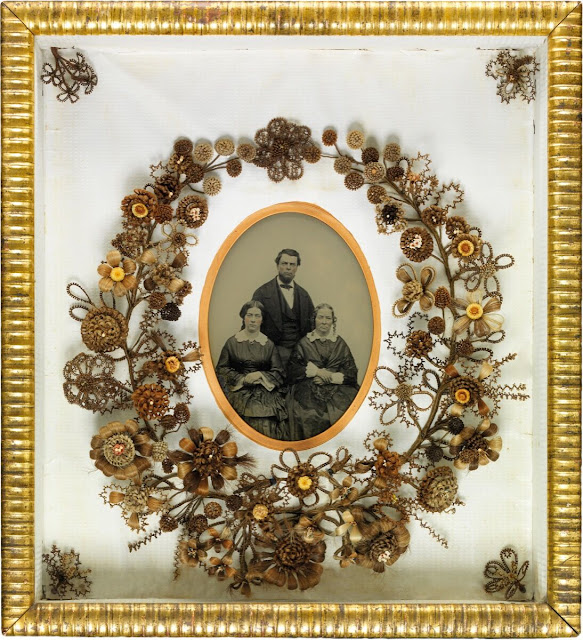 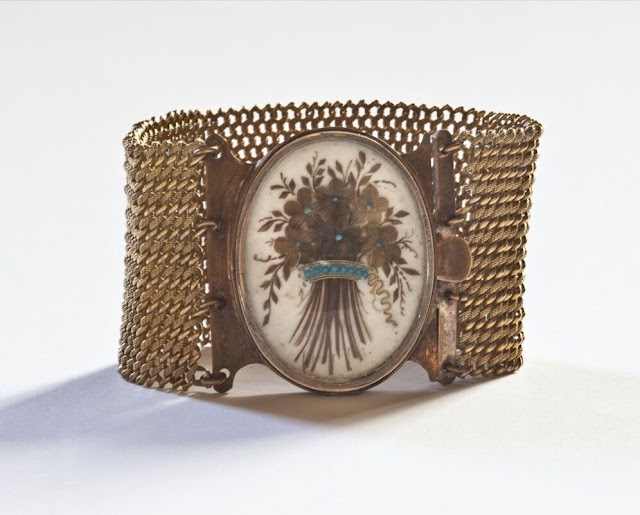 "Flesh rots to bone, taking our faces and figures with it. But clip a lock of hair, and it will keep its color for decades, even centuries. Thus, art crafted from hair—a 19th-century tradition in which tresses were braided into jewelry, looped to resemble flower petals, even ground up for use in pigments—remains frozen in time.
Hair art has its roots in the 17th and 18th century, when high infant mortality rates meant that “death was everywhere,” writes Karen Bachmann in an essay for the recent book Death: A Graveside Companion. “The keeping and saving of hair for future use in jewelry or other commemorative craft (such as wreaths) was common.” But it wasn’t until the Victorian era that “the ‘cult of the dead’ became almost a mania in Britain.”
Rarely does the name of the artist survive. It’s believed that most works of hair art were made by women; books on ladies’ “fancywork” provided instructions alongside other Victorian parlor crafts like needlework or wax flowers. One technique, known as palette work, required hair to be laid flat and woven into a pattern, then cut with stencils into shapes. Table work, on the other hand, called for hair to be plaited into jewelry or heirlooms. An 1867 edition of a hair art guide by Mark Campbell affirms: “Persons wishing to preserve and weave into lasting mementos, the hair of a deceased father, mother, sister, brother, or child, can also enjoy the inexpressible advantage and satisfaction of knowing that the material of their own handiwork is the actual hair of the ‘loved and gone.’”

More at the Artsy link, which is quite interesting.
A recent article in Vogue highlights the work of a modern hair artist.

"She arranges her hair one by one, gluing each strand onto delicate Japanese tissue paper before the compositions are framed in lockets or miniatures..."

Elephants working in a salt mine. By choice.

Kitum Cave is a non-solutional cave developed in pyroclastic (volcanic) rocks (not, as some have presumed, a lava tube). It extends about 200 metres (700 ft) into the side of Mount Elgon near the Kenyan border with Uganda. The walls are rich in salt, and animals such as elephants have gone deep into the cave for centuries in search of salt. The elephants use their tusks to break off pieces of the cave wall that they then chew and swallow, leaving the walls scratched and furrowed; their actions have likely enlarged the cave over time. Other animals including bushbuck, buffalo and hyenas come to Kitum Cave to consume salt left by the elephants.

Two of my favorite things

1) watching a video that explains something I didn't know, and
2) listening to people speaking Scottish English.
Re the latter, may I heartily recommend the movies of Kelly Macdonald (Trainspotting x2, No Country For Old Men, but especially Puzzle).
5 comments:


I love duets. This one is by two undisputed legends. Performed in New York City, 2003 on the occasion of Willie Nelson's 70th birthday.  What a fantastic birthday party that must have been.

For Clapton performing "Layla" and the history of the song, see here.

Even better is the story behind "Tears in Heaven."
Reposted from 2009.  Shouldn't have waited so long.
5 comments: 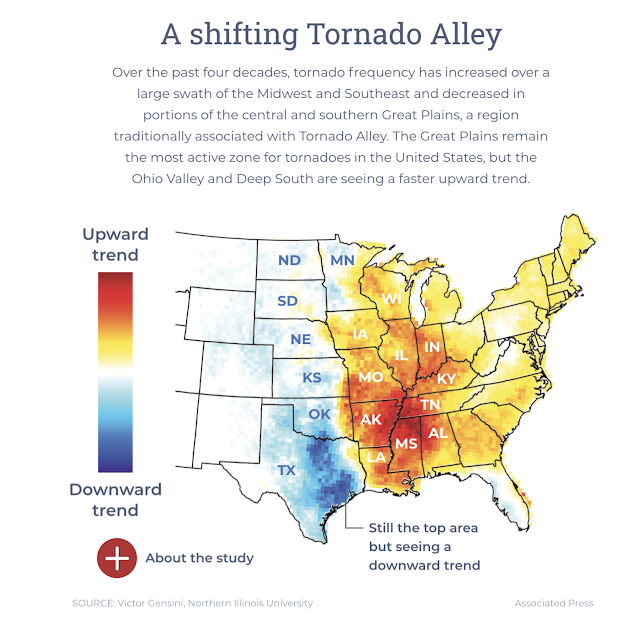 "Meteorology professor Victor Gensini of Northern Illinois University and Harold Brooks of NOAA’s National Severe Storms Laboratory tracked the number of tornado reports from 1979 to 2017, while also investigating regional trends in the daily frequency of tornado-environment formation over the same time period, using an index known as the Significant Tornado Parameter (STP). Frequently used for predicting severe weather, the index captures the coexistence of atmospheric ingredients favorable for producing tornadoes. Both the number of actual tornado reports and the historical STP analysis showed the eastward uptick in tornado frequency."

Via the Wisconsin State Journal.
3 comments: 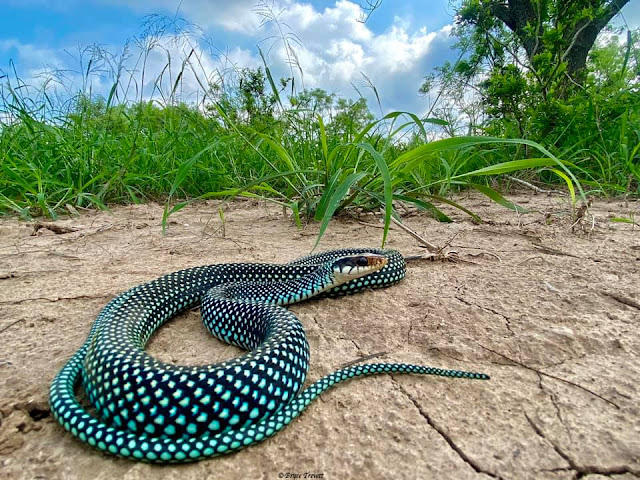 A Speckled Racer (Drymobius margaritiferus) in south Texas.  Beautiful.  Best comment at the via: "Non venomous but it sure looks dangerous. Judging by its striking color and pattern it's likely that it evolved to camouflage itself among piles of early 90's neckties."
2 comments:

Props to this man

Via the always-interesting Nag on the Lake.
2 comments: 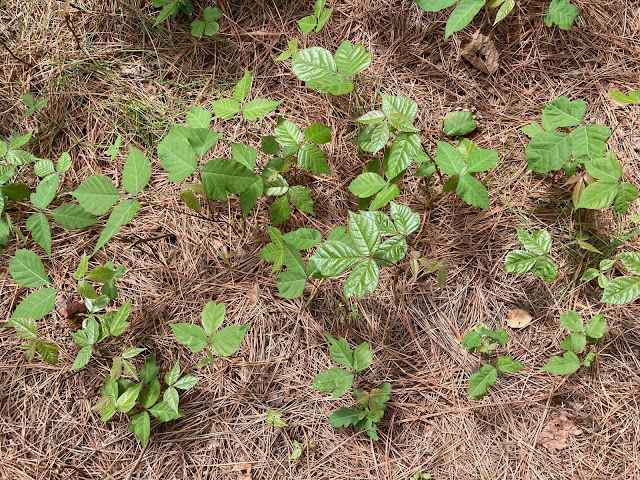 "It can be a ground cover, or shrubby, or a woody vine (called a liana), achieving nearly treelike proportions. Its leaves can be shiny or matte (even in the same population), in various shades of green (or red-bronze, upon emergence), and they vary in size and shape, with margins from smooth to toothed or deeply lobed." 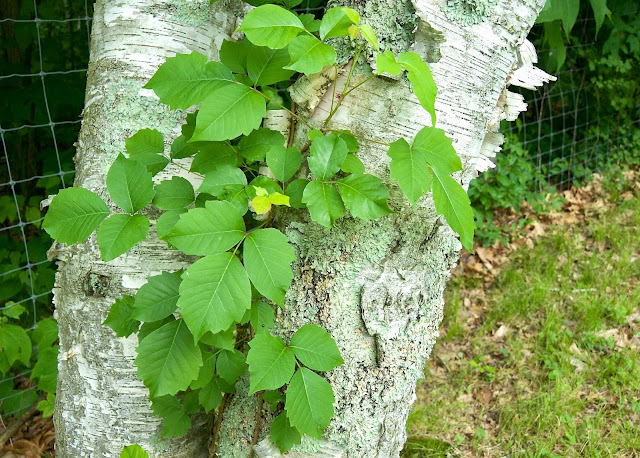 “In one area in Quebec,” Ms. Pell said, “it has straplike leaflets and looks like a fern. In the Southeast, I have seen leaflets as long and wide as my head, and elsewhere, often very close by, leaflets shorter than my thumb.” 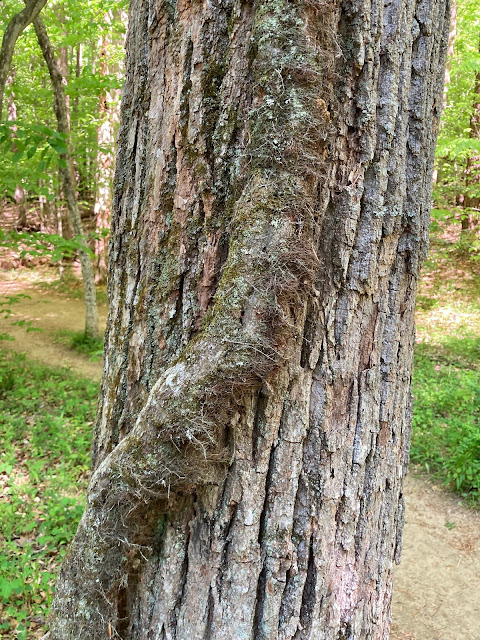 "Remember that any tools you use and garments you wear will be tainted with urushiol, and unless they’re thoroughly cleaned they can transfer it to your skin. Carefully bag any debris for the trash, but don’t add it to a burn pile: Urushiol can be released in smoke and will damage lungs.
And don’t make the mistake of thinking that it will wear off over time.
“I have heard of rashes caused by contact with tools that hadn’t been used in two years, but still had resin on them,” Ms. Pell said. Researchers referring to old herbarium specimens in scientific collections have likewise had reactions to the dried, pressed plants."

More information re identification and management of poison ivy at the New York Times.
I know of one huge patch of poison ivy on a golf course in northern Minnesota.  Since I'm not sensitive to the oil, I have on occasion waded in to retrieve errant drives, once emerging with my ball and twelve others.
7 comments:

Obsidian flakes found at the bottom of Lake Huron at a location that apparently was a land bridge across the lake 9,000 years ago.  More about the topography of Lake Huron.
Interesting because this obsidian was obviously crafted by humans, and it was not locally sourced.  It would have come from the area that is now the state of Oregon.
2 comments: