My post last week on Fortunetelling at Christmastide, about Carpathian folk customs, elicited a flurry of comments from readers that led to some interesting reading about methods of divination.

Since the young lady in the painting is holding a candle in her hand, I presume the two girls were probably practicing carromancy: 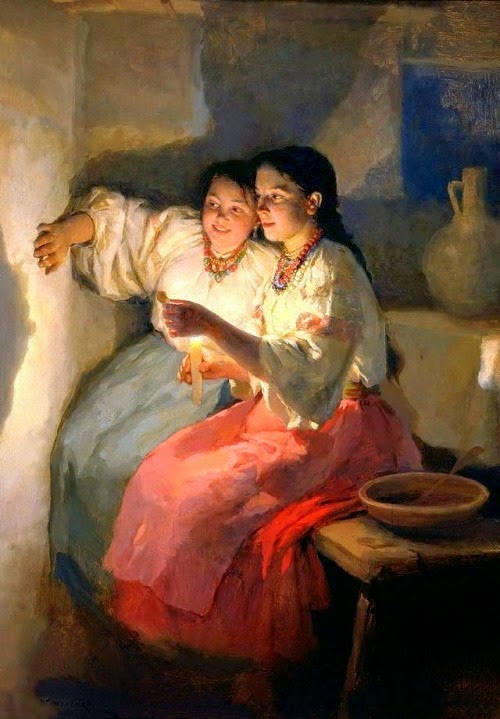 Carromancy (from Greek carro, 'waxen', and manteia, 'divination'), otherwise known as ceromancy, is a form of divination involving wax. One of the most common methods of carromancy is to heat wax until molten, then to pour it directly into cold water. The shapes and movements of the wax as it cools and solidifies can then allegedly be read*. Another method more commonly practiced in the contemporary era is studying the burning of an ordinary candle. The movements and erratic actions of the flame are then said to predict the future.

I prefer the alternate spelling of ceromancy, because of the etymological link to cerumen ("ear wax").

For a comprehensive report on carromancy in Ukraine, see this 30-page long 2004 article published in the journal Folklorica.

An obviously-related form of divination is molybdomancy, nicely illustrated in the video embedded at the top.


The method was invented in ancient Greece, and today it is a common New Year tradition in the Nordic countries and Germany and Austria. Classically, tin is melted on a stove and poured into a bucket of cold water. The resulting shape is either directly interpreted as an omen for the future, or is rotated in a candlelight to create shadows, whose shapes are then interpreted.

In Finland, shops sell ladles and small bullions in the shape of a horseshoe for this express purpose. Originally made from tin, now they are made from cheaper low-melting alloys based on lead. The practice is known as uudenvuodentina. World's largest uudenvuodentina, 41 kg, was cast by members of the Valko volunteer fire department in Loviisa, Finland in New Year 2010.

*edited to delete the impressively hyperredundant "to forecast auguries of the future."