The two-tailed lions of Bohemia 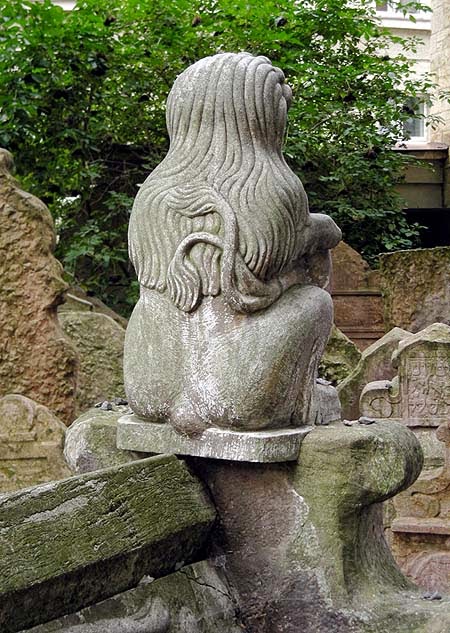 The image above shows the rear view of a lion with a forked tail.


This lion decorates the most beautiful headstone of the old Jewish cemetery in Prague. Not one lion, but two, one at each end of the sarcophagus, which includes four tails all in all...

This pose of the lions and their double tail is really quite unusual in a Jewish cemetery. We have already mentioned that the lion on Jewish tombstones mostly refers to the tribe of Judah or those of Davidic descent, or the name of the deceased as Judah, Aryeh, Leb or Löw. Sometimes it supports, together with a fellow lion, the crown of the Torah, which symbolizes the protection of the faith. But it never holds a nobleman’s coat of arms – as a Jew could never have such a thing –, nor is it ever double-tailed, which has served as the heraldic device of Czech kings, ever since Emperor Frederick Barbarossa in 1558 1158 bestowed it, together with the title of king, upon the Czech prince Wladislaw II, for having supported his Milan campaign.

An earlier post at Poemas del rio Wang documents the extensive use of the double- or forked-tail lion in Prague and surrounding areas.

The Wikipedia entry on the Lion in heraldry depicts the basic creature and its variants: "The tail also may be knotted (nowed), forked (queue fourchée) or doubled (double-queued); as in the arms of the kingdom of Bohemia."

But why double?  Or forked?  I know of no legendary creatures with such an attribute.  If I were to bet a nickel, I would guess that the original artist drew a double tail as an artistic convention to depict a tail in motion, and thereafter the tradition was established.  Some readers with actual knowledge may be able to offer a more definitive explanation.