Can you weigh the air in a football? - updated 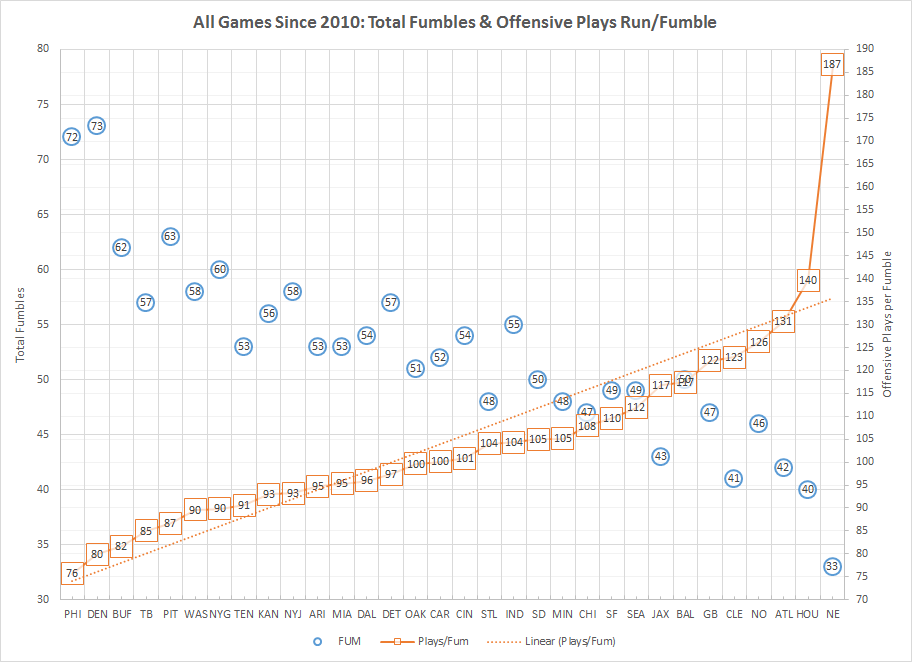 Following the AFC championship game, there were allegations that some member of the New England Patriots staff may have provided their team with slightly underinflated footballs (which would be easier to grip in cold wet weather).


Newsday reported that Jackson then gave the ball to a member of the Colts' equipment staff, who noticed the ball seemed underinflated. At that point, coach Chuck Pagano and general manager Ryan Grigson were notified, and Grigson alerted NFL director of football operations Mike Kensil, according to the report...

On the first offensive play from scrimmage in the third quarter, following a kick return, referee Walt Anderson briefly stopped play to replace a football which could have been related to this issue.

I'm puzzled by the claim that the underinflation was investigated by weighing the ball:


The NFL source reportedly told Kravitz that "officials took a ball out of play at one point and weighed it." According to NBC Sports, "several" abnormal balls were allegedly removed from gameplay during the match-up.

The professional football is supposed to weigh between 14 and 15 ounces, inflated to between 12.5 and 13.5 pounds per square inch.  Can an inflation discrepancy be detected by weighing the ball?  Seems doubtful.

Addendum:  ESPN is reporting that 11 game balls were underinflated.  The Washington Post provides the backstory on why the New England Patriots are a controversial team in this regard.

Addendum #2: This topic is going to be in the news for quite a while.  Today The Guardian describes how altering game footballs has been going on for a long time:


Retired quarterback Brad Johnson, who played for four teams over 17 NFL seasons, said he “paid some guys off to get the balls right” ahead of his lone Super Bowl appearance with the Tampa Bay Buccaneers after the 2002 season. (His team’s 48-21 victory over the Oakland Raiders suggests it might have worked.)

Johnson’s opponent in that game, Rich Gannon, told CBS Sports: “Ask any quarterback, and this is a non-issue. Everybody does something to them. It’s like a pitcher, he wants the ball a certain way.” Former quarterback Boomer Esiason declared, “Everybody is doing the same thing.”

For those who argue that the deflated balls were weather-related and affected both teams, it's important to note that each team plays with its own balls (the media are replete with double-entendre phrases like this - no need to repeat them in the comments here).  And the blame will not fall on the players or the coaches:


But the quarterback need not alter the ball himself or instruct that anyone do so; he only need over the course of 13 years make known to the Patriots how he likes his footballs. But if some member of the Patriots staff acted without Brady or coach Bill Belichick’s knowledge or permission — and if the NFL can never prove what happened — then both men can justifiably deny wrongdoing even if they somehow share the guilt.

It's easy to predict that that is how this will all come down - with some minor lackey in the dungeons of the football stadium being castigated (and perhaps surreptitiously recompensed).

So that's the end of "Deflategate" in my view.  More interesting is this report from Sharp Football Analysis which notes that it is statistically unlikely that the New England Patriots achieved their "fewest fumbles" records just by skill -


I immediately noticed something that cannot be overlooked: the issue with ball security and fumbles. Then I remembered this remarkable fact: The 2014 Patriots were just the 3rd team in the last 25 years to never have lost a fumble at home!

The biggest difference between the Patriots and the other 2 teams who did it was that New England ran between 150 and 200 MORE plays this year than those teams did in the years they had zero home fumbles, making the Patriots stand alone in this unique statistic...

I looked at the last 5 years of data (since 2010) and examined TOTAL FUMBLES in all games (as well as fumbles/game) but more importantly, TOTAL OFFENSIVE PLAYS RUN. Thus, we can to determine average PLAYS per FUMBLE, a much more valuable statistic. The results are displayed in the chart [which I've moved to the top of the post].

Keep in mind, this is for all games since 2010, regardless of indoors, outdoors, weather, site, etc. EVERYTHING. One can CLEARLY SEE the Patriots, visually, are off the chart. There is no other team even close to being near to their rate of 187 offensive plays (passes+rushes+sacks) per fumble. The league average is 105 plays/fumble. Most teams are within 21 plays of that number...

The Patriots are so “off the map” when it comes to either fumbles or only fumbles lost.  As mentioned earlier:  this is an extremely abnormal occurrence and is NOT simply random fluctuation.

More data and analysis at the link.


To really confirm something was dramatically different in New England, starting in 2007 thru present, I compared the 2000-06 time period (when Bill Belichick was their head coach and they won all of their Super Bowls) to the 2007-2014 time period.  The beauty of data is the results speak for themselves: 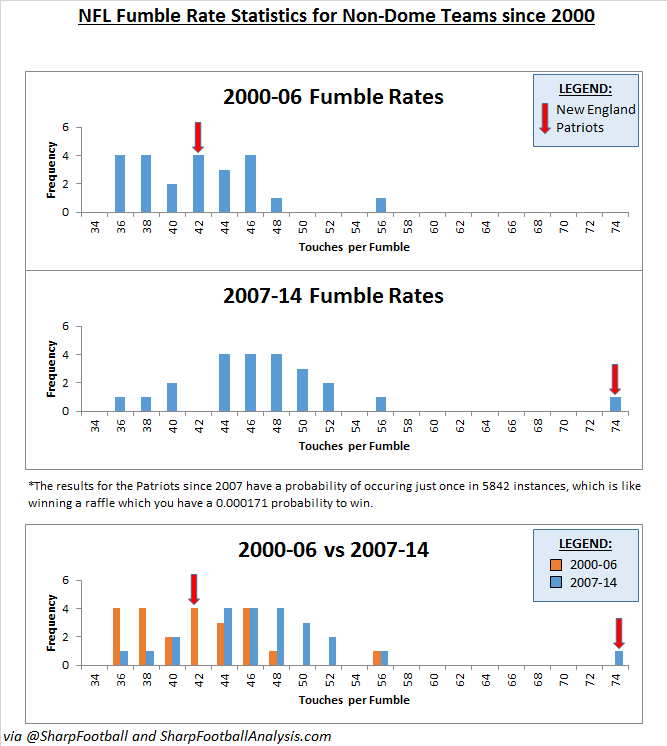 (Note the above chart of "fumble rates" expresses the data as "touches per fumble," so a higher number is a better performance).


In 2006, Tom Brady (and Peyton Manning) lobbied in favor of changing a NFL rule, and as a result, the NFL agreed to change policies. Brady wanted the NFL to let EVERY team provide its OWN footballs to use on offense, even when that team was playing on the road. Prior to that year, the HOME team provided ALL the footballs, meaning the home quarterback selected the footballs the ROAD quarterback would play with on offense...

The statistical “jump” the Patriots make in the 2006 offseason, from one fumble every 39 plays to one fumble every 76 plays is nothing short of remarkable.  Their trendline over this period is not even close to that of the rest of the NFL.

More crunching of the numbers at this link.