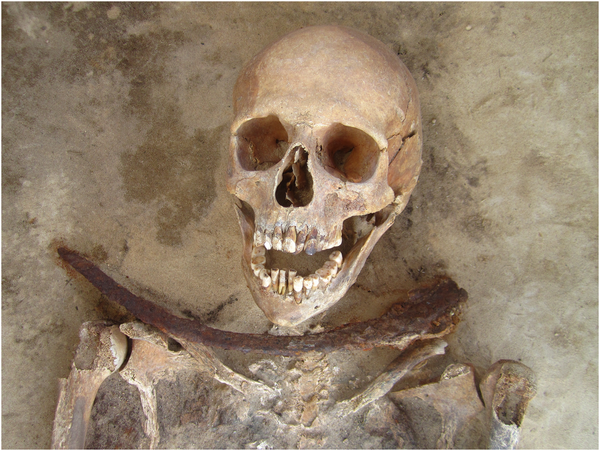 The woman in the photo above was buried with a sickle placed across her neck.


Apotropaic observances-traditional practices intended to prevent evil-were not uncommon in post-medieval Poland, and included specific treatment of the dead for those considered at risk for becoming vampires. Excavations at the Drawsko 1 cemetery (17th–18th c. AD) have revealed multiple examples (n=6) of such deviant burials amidst hundreds of normative interments... These data indicate that those targeted for apotropaic practices were not migrants to the region, but instead, represented local individuals whose social identity or manner of death marked them with suspicion in some other way.

The above from the abstract.  The rest of the report at the link includes an extended discussion of beliefs about vampires and the use of strontium isotopes in forensic archaeology.

This is the first time I've seen a sickle employed on a deviant burial.  Weights like stones and bricks are more common.  Very cool.