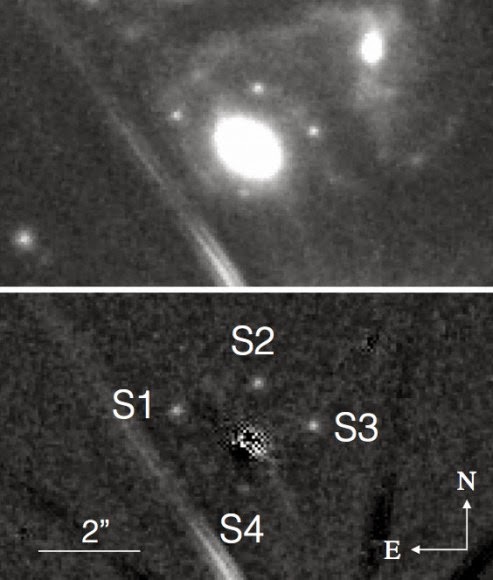 The four dots centered on the bright elliptical galaxy at top are multiple images of supernova SN Refsdal taken with the Hubble Space Telescope between November 10-20, 2014. In the bottom image, the galaxy has been digitally removed to show only the supernova images, labeled S1 through S4. The line segments are diffraction spikes from a nearby star. Credit: P.L. Kelly/GLASS/Hubble Frontier Fields


Using the Hubble Space Telescope, Dr. Patrick Kelly of the University of California-Berkeley along with the GLASS (Grism Lens Amplified Survey from Space) and Hubble Frontier Fields teams discovered a remote supernova lensed into four copies of itself by the powerful gravity of a foreground galaxy cluster... It’s the first multiply-lensed supernova ever discovered and one of nature’s most exotic mirages...

In effect, the [galaxy] acts as a lens, bending and refocusing the light from the distant source into either a brighter image or multiple and distorted images. Also known as the deflection of starlight, nowadays we call it gravitational lensing...

Rich galaxy clusters act like telescopes – their enormous mass and powerful gravity magnify and intensify the light of galaxies billions of light years beyond, making visible what would otherwise never be seen...

To create such neat symmetry, [the supernova] must be precisely aligned behind the galaxy’s center.

More details, images, and discussion at the link.   I understand the "lensing" principle, but perhaps some reader can further explain why the lens would create four discrete images rather than a circular "halo" around the galaxy.

I'm also pleased to note that the lead author of the study is the son of my old debate partner from high school.  Kudos!

Addendum:  One of the joys of writing this blog is having an audience of readers who are able to answer many of my questions - often within just a couple hours of my posting a query.  So, a tip of the blogging hat to reader Jeff, who provided a link to a relevant AskScience subreddit thread.

The circular "halo" lensing effect I postulated above is well known, and is called an Einstein ring.  It forms around spherical masses (think black hole).   A galaxy, however, is not typically spherical - when light from a quasar traverses an ellipsoidal galaxy, the result is an Einstein Cross, with the four foci corresponding to the major and minor axes of the mass distribution of the galaxy.  Easy as pie.

Update March 5:  The findings above were featured in a New York Times article today -


...the explosion is expected to appear again in another part of the sky in the next 10 years. Timing the delays between its appearances, he explained, will allow astronomers to refine measurements of how fast the universe is expanding... Dr. Kelly and his colleagues suspect that Supernova Refsdal has appeared before, around 1964 and 1995, in other lensed images of the spiral galaxy.

The link has a well-done informative video explaining gravitational lensing.