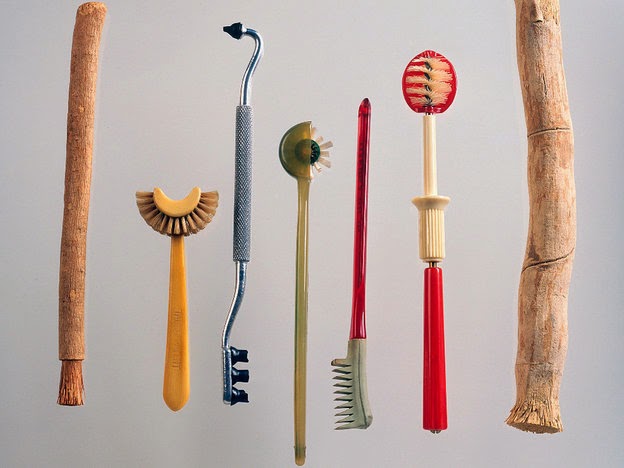 From an interesting article at Collector's Weekly.


Since at least 3000 B.C., people in the Mesopotamian region used the frayed ends of fibrous twigs or chew sticks, also known as miswak or siwak sticks, to clean their teeth. “Different cultures have used twigs from trees and shrubs with wood grain that is very intertwined,” says Scott Swank, a dentist, historian, and curator of the National Museum of Dentistry. “You peel the bark off and chew it to get the fibers to fray out, and then you use those frayed fibers to clean your teeth. They’re still used today in some parts of Africa and the Middle East.”

Much more at the link, including information on "toothworms":


“Many people in the past believed ‘tooth worms’ were the cause of tooth decay—tiny creatures that would bore holes in people’s teeth,” explains Fitzharris. Records indicate that the fear of tooth worms goes back at least to the time of the Sumerians, or around 5,000 years ago... “Often, practitioners would try to smoke the worm out by heating a mixture of beeswax and henbane seed on a piece of iron and directing the fumes into the cavity with a funnel,” Fitzharris says. “Afterwards, the hole was filled with powdered henbane seed and gum mastic, which may have provided temporary relief given the fact that henbane is a mild narcotic.

And this about George Washington's dentures:


By the time Washington was elected president at age 57, he only had one natural tooth remaining in his mouth. “During the presidency, he lost that one, too,” says Swank. [note the hole in his dentures, designed to accommodate that last tooth] 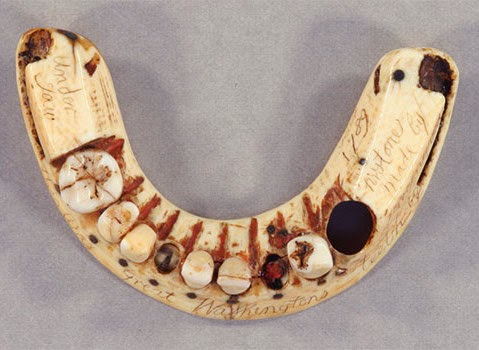 
By the mid-19th century, dentures were often referred to as “Waterloo Teeth,” after those surreptitiously ripped from the bodies of dead soldiers following the Battle of Waterloo in 1815... While publicly frowned upon, stealing teeth from dead soldiers continued throughout the Crimean War and the American Civil War.

Much more at the link.  You learn something every day.