The complexities of "free speech" and "freedom of the press"

TYWKIWDBI will not be dwelling on the Charlie Hebdo tragedy, which is extensively covered elsewhere.  But I thought it worthwhile to excerpt a couple comments, first by Glenn Greenwald in The Intercept:

But this week’s defense of free speech rights was so spirited that it gave rise to a brand new principle: to defend free speech, one not only defends the right to disseminate the speech, but embraces the content of the speech itself... 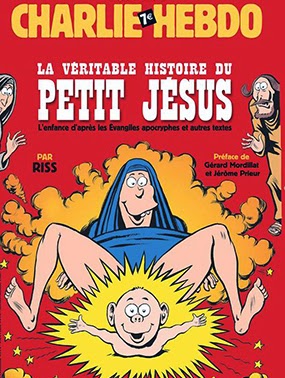 Some of the cartoons published by Charlie Hebdo were not just offensive but bigoted, such as the one mocking the African sex slaves of Boko Haram as welfare queens. Others went far beyond maligning violence by extremists acting in the name of Islam, or even merely depicting Mohammed with degrading imagery, and instead contained a stream of mockery toward Muslims generally, who in France are not remotely powerful but are largely a marginalized and targeted immigrant population. ..

So it’s the opposite of surprising to see large numbers of westerners celebrating anti-Muslim cartoons - not on free speech grounds but due to approval of the content... Indeed, it is self-evident that if a writer who specialized in overtly anti-black or anti-Semitic screeds had been murdered for their ideas, there would be no widespread calls to republish their trash in “solidarity” with their free speech rights...

When we originally discussed publishing this article to make these points, our intention was to commission two or three cartoonists to create cartoons that mock Judaism and malign sacred figures to Jews the way Charlie Hebdo did to Muslims. But that idea was thwarted by the fact that no mainstream western cartoonist would dare put their name on an anti-Jewish cartoon, even if done for satire purposes, because doing so would instantly and permanently destroy their career, at least...

To see how true that is, consider the fact that Charlie Hebdo – the “equal opportunity” offenders and defenders of all types of offensive speech - fired one of their writers in 2009 for writing a sentence some said was anti-Semitic (the writer was then charged with a hate crime offense, and won a judgment against the magazine for unfair termination). Does that sound like “equal opportunity” offending?

Similar thoughts were echoed at The Dish (citing other sources):


Put simply, in France, racist and anti-Semitic speech, as well as historical revisionism regarding the Holocaust, is illegal, as is all speech that can be considered an incitement to hate. That is something that very few Americans understand—or approve of... 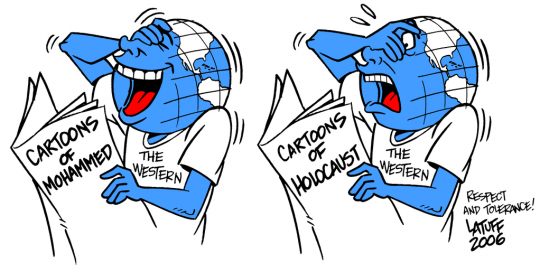 The last lawsuit to be filed against Charlie Hebdo in 2014 was declared ineligible only because Islam doesn’t qualify for the special legal regime that criminalizes blasphemy against Christianity and Judaism in the Alsace region. And the British Muslims in 1989 wanted authorities to invoke British blaspehemy laws, not the shar’ia, to sanction Salman Rushdie’s novel – but there too Islam did not qualify for protection...

It wasn’t that long ago that entertainers like the Dixie Chicks were being roundly denounced and taken off the air for having the temerity to question our country’s wars.

The counterargument is that this is comparing apples to oranges:


This is a completely false equivalency, and really gets to the heart of the cultural gap at play. To secularists like the cartoonists at Charlie Hebdo, Mohammed is a man like any other, he is no prophet, he is aggrandized by a religion, and is therefore a legitimate target of satire, just like the the Pope, or Jesus, or even the Dalai Lama if one is so inclined. The Holocaust was systematic genocide based on religion/ethnicity.

I'll close the comments here, because there's so much discussion elsewhere (everywhere), but I'd suggest that those who expect to address the Charlie Hebdo event at cocktail parties or around office water-coolers should ponder the above in order to be prepared for the discussions.