This cleric, who should read The Name of the Rose:


Manama: Saudis in the northern areas drew on their imagination and sense of fun as they braved the cold weather to build snow camels in a rare tribute to the local culture. One citizen in the Province of Tarif used his snow camel to promote the colours of local teams, drawing praise from the fans, while another opted for the traditional ghitra and agal to cover the head of the snowman he built.

However, it was not all fun for Saudis after a religious scholar said that building snowmen or snow animals was not acceptable in Islam. The fatwa, by Mohammad Only lifeless things, such as ships, fruit and buildings could be imitated, the fatwa said. “It has no value in our traditions, and those who are fascinated by the West should emulate their inventions and sciences, not their culture"... Saleh Al Minjed, said that building snowmen or any replica of an animal, even if it is for fun or recreation, could not be condoned.

However, Mishaal, an angry blogger, blasted the fatwa. “We have snow for fleeting days, maybe even hours, and there is always someone who wants to rob us of the joy and the fun,” he posted. “It seems that the only thing left for us is to sit down and drink coffee,” he said.

And these editors, who reject reality and substitute their own: 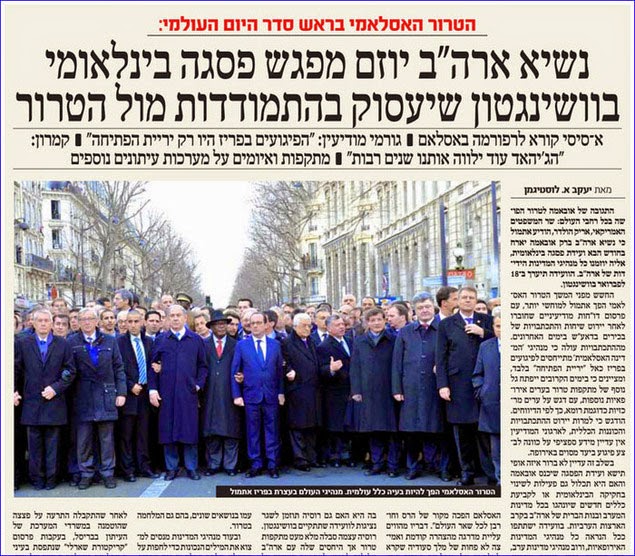 Yesterday’s historic march across Paris included over 40 world leaders expressing solidarity for France after the Charlie Hebdo massacre, but if you read this Haredi newspaper, you’d believe that none of them were women...

The [missing] woman in the blue scarf is Anne Hidalgo, the Mayor of Paris, who rallied the city to respond to the egregious attacks, but is totally a woman and therefore not important enough to be in these images. The woman in the puffy coat cropped out of the picture is... Federica Mogherini, the High Representative of the European Union for Foreign Affairs and Security Policy... She’s an extremely important figure in European politics — her position places her in charge of the EU’s foreign policy — but she’s still a woman, so no, she doesn’t get to be in the photo. Merkel is still missing, please let us know if you find her.

And this tone-deaf publishing house that is afraid it might offend... somebody:

Authors are being warned not to mention pigs or sausages in children's schoolbooks - in an apparent bid to avoid offending Muslims and Jews. Top academic publisher the Oxford University press has issued guidance that authors should avoid using pork-related words...

Today Programme presenter Jim Naughtie, who is married to writer Eleanor Updale, said: "I've got a letter here which was sent out by Oxford University Press to an author doing something for young people. "Among the things prohibited in the text that was commissioned by OUP was the following; 'Pigs (plus anything else which could be perceived as pork.'"  The OUP defended the guidance by saying it needs to make its books available to the widest audience possible....

Jewish leaders said their religion prohibits pork being eaten - not the mention of the word.

Somehow we have to figure out how to get along with one another.  (btw, Americans are mocked in a separate post)