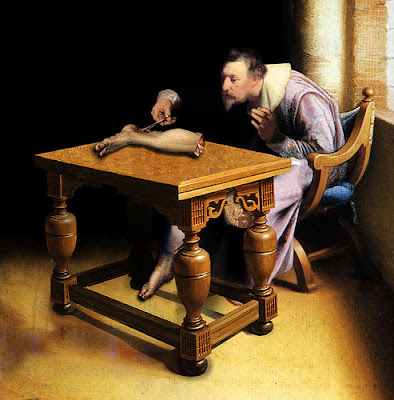 
Once the leg was injected, it was placed in a container of liquor balsamicus or Nantic brandy and black pepper, which permanently prevented decomposition. It is thought that Verheyen's strong religious views made him deeply suspicious of burying one part of his body before the remainder was ready for the same fate.


Sensations which in many ways prompted him to take up a career in anatomy in order to probe and understand this phenomenon and also write the deeply personal series of notes (1700-1710) that may be translated either as " Notes on My Amputated Leg," or "Letters to My Amputated Leg," the former seeming more probable, while the latter is more in keeping with the tone of the notes.

His interest, curiously, was more than anatomical...


by 1693 Verheyen began dissections on his preserved left leg. He is known for having coined the term "Chorda Achillis" during this time - referring to the only part of Achilles's body that his mother held, as she dipped him into the Styx leaving it vulnerable to decay and death. As gleaned from his Notes, his aim was to prove that the nagging sensation of his phantom limb in fact originated from the actual amputated limb, rather than some psychosomatic, or worse still, numinous force.

He continued to be fascinated by his leg in the final decades of his life...


...in the Fall of 1710, he found Verheyen intently gazing out of his window in some distraction. His amputated leg lay on the surgery table dissected into so many separate parts. Each infinitesimal tendon, muscle and nerve cut down to its primary unit, was labeled and spread across the wooden tabletop.
That winter, Philippe Verheyen died and was buried near the Abbey of Vlierbeek. Though there is no written record of this fact, it is assumed that his leg was buried along with him.

Update:  I first posted this in 2009.  It was recently commented on by reader Hedwige Daenens, who identified the artwork as a recent art project, not an 18th century painting.

Phillip Verheyen was a real person and a distinguished anatomist.  And he did have his leg amputated.  But there are good reasons to conclude that the story of him dissecting his own amputated leg is fictional.  There is a superb biography of him in Acta Chirurgica Belgica (pdf).

I don't mind that an artist has created a project that portrays an imagined event in the life of a real person; artists and authors do that all the time.  I do object when she inserts that painting into a Wikipedia entry with a fake notation: "Artist: Anonymous (18th c) Title: Philippe Verheyen Dissecting His Amputated Limb (1715-1730) Medium: Oil on Panel Size: 16.3"X16.5" Source: Collection of Pieter Deheijde."