The ongoing decline of the fossil fuel industry 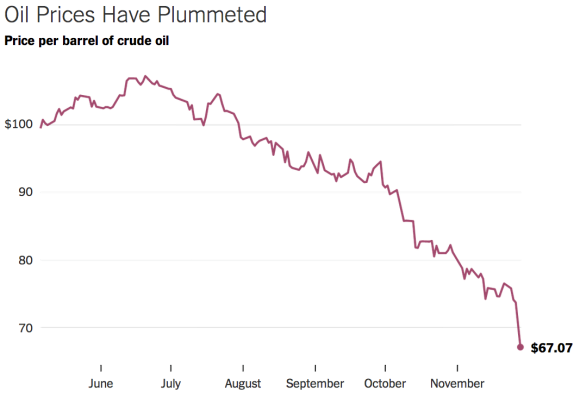 Back in 2015 I wrote a post about the declining price of crude oil and its relationship to fracking and to market demand.  That post included the graph above (unclear whether the price cited is Brent crude or WTI, but it doesn't matter).

Note the vertical scale compared to this next - current - graph (details here re the "price war" referred to). 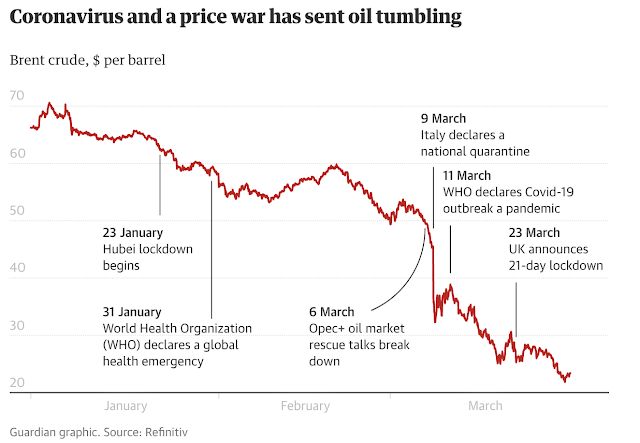 An article in The Guardian today discusses the ramifications of a collapse in the fossil fuel industry.  Environmentalists and others may view such a collapse with glee, but there are certain broader implications:


The looming fossil fuel collapse could pose “a significant threat to global financial stability” by wiping out the market value of fossil fuel companies, according to financial thinktank Carbon Tracker...

It warns that a blow to fossil fuel companies could send shockwaves through the global economy because their market value makes up a quarter of the world’s equity markets and they owe trillions of dollars to the world’s banks...

“The bizarre thing is that the fossil fuel incumbents have been so resistant to the idea of change for so long, and put out so much bogus PR, that they risk falling victim to their own rhetoric,” he said.

“There is far more risk inherent in the fossil fuel system than is conventionally priced into financial markets. Investors need to increase discount rates, reduce expected prices, curtail terminal values and account for the clean-up costs."