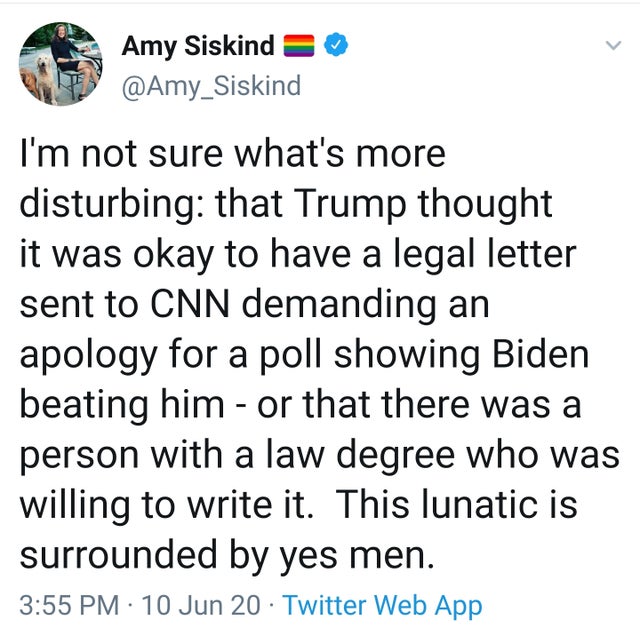 Lots of comments from persons with legal training at the via, including:


I mean, that’s literally the job of lawyers lol. They have substantial control over the manner and an ethical obligation to not pursue frivolous claims, but that’s a very high bar to meet (frivolity).

My state bars (I’m in 2) require that any demand letter, when there is a direct or implied threat of future legal action, be based on the facts as we know them to be at the time and the law as it is at the time. If the client’s case fails at either of those and we know it, no letter. If we do go ahead and send the letter without a good faith basis, we can get into a load of trouble with the bar.

The point wasn't to get CNN to retract a correct poll or go to court, it was to create doubt in people's minds ("Well, the president said it was fake and even sent a letter! He wouldn't do that unless he had a good reason"). Then the next time CNN says or does something, people will think "CNN? The same people who put out that fake poll on Trump? I can't trust them".

That's how the misinformation war is fought. It's the same story with all of the "fake news" statements.


"To my knowledge, this is the first time in its 40-year history that CNN had been threatened with legal action because an American politician or campaign did not like CNN's polling results," Vigilante wrote in his response. "To the extent we have received legal threats from political leaders in the past, they have typically come from countries like Venezuela or other regimes where there is little or no respect for a free and independent media."