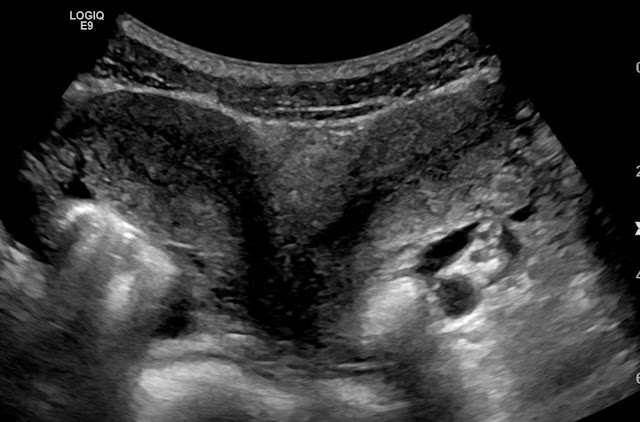 "Kelly Fairhurst, 28, only learned she had uterus didelphys, a condition where a woman has two wombs, when she went for her 12-week scan. She was also told she was carrying twins, one in each womb... Fairhurst, who was also surprised to be told she had two cervixes... Doctors have told Fairhurst, who lives in Braintree, Essex, that she might have two separate labours and the plan is for her to have both of the babies by cesarean section."

More details at The Guardian, via Neatorama.  The terminology was new to me, so I had to look it up:


Uterus didelphys (sometimes also uterus didelphis) represents a uterine malformation where the uterus is present as a paired organ when the embryogenetic fusion of the Müllerian ducts fails to occur. As a result, there is a double uterus with two separate cervices, and possibly a double vagina as well. Each uterus has a single horn linked to the ipsilateral fallopian tube that faces its ovary.

Most non-human mammals do not have a single uterus with no separation of horns. Marsupials and rodents have a double uterus (uterus duplex). In other animals (e.g. nematodes), the term 'didelphic' refers to a double genital tract, as opposed to monodelphic, with a single tract.

The "di" part is easy to understand in a duplicated system.  What about the "delphys"/"delphic" part?  That's directly from the Greek for "womb."

Which leads us to "Delphi" -


In myths dating to the classical period of Ancient Greece (510–323 BC), Zeus determined the site of Delphi when he sought to find the centre of his "Grandmother Earth" (Gaia). He sent two eagles flying from the eastern and western extremities, and the path of the eagles crossed over Delphi where the omphalos, or navel of Gaia was found.

The name Delphi comes from the same root as δελφύς delphys, "womb" and may indicate archaic veneration of Gaia at the site. Apollo is connected with the site by his epithet Delphinios, "the Delphinian". The epithet is connected with dolphins in the Homeric Hymn to Apollo (line 400), recounting the legend of how Apollo first came to Delphi in the shape of a dolphin, carrying Cretan priests on his back.

So the word "dolphin" is also related:


The name is originally from Greek δελφίς (delphís), "dolphin", which was related to the Greek δελφύς (delphus), "womb". The animal's name can therefore be interpreted as meaning "a 'fish' with a womb". The name was transmitted via the Latin delphinus (the romanization of the later Greek δελφῖνος – delphinos), which in Medieval Latin became dolfinus and in Old French daulphin, which reintroduced the ph into the word. The term mereswine (that is, "sea pig") has also historically been used.

And from "dolphin" we get "delphinium":


The genus name Delphinium derives from the Ancient Greek word δελφίνιον (delphínion) which means "dolphin", a name used in De Materia Medica for some kind of larkspur. Pedanius Dioscorides said the plant got its name because of its dolphin-shaped flowers.

From there we could probably go to Philadelphia, and to other "delph" words. And for those interested, there is a condition called diphallia (two penises), but we're not going there today.