Is Paul Bunyan from Minnesota ? 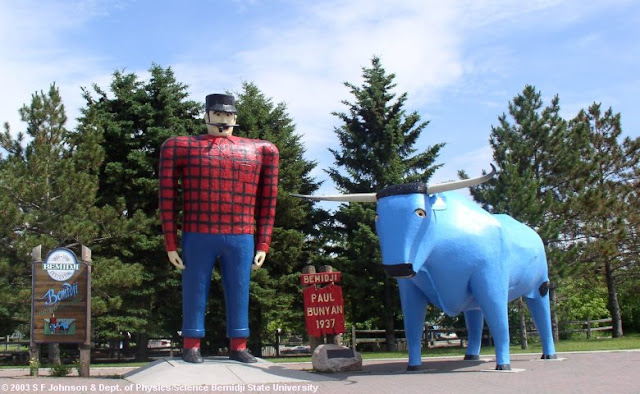 Today I needed an image of Paul Bunyan; I found one on an item I wrote back in 2012, when I was taking a blogcation to have bunion surgery:


"This morning I'm on my way to the hospital for some scheduled surgery.  It's a reasonably minor procedure (which I won't go into details about)* but I certainly won't be able to spend my usual 10 hours a day at my desk, and without a working laptop, blogging will probably have to be deferred.  Time for me to catch up on reading and you to explore other blogs.

*but for the curious, I've left a clue in the embedded photo.

That post generated 60 comments from readers speculating about what in the photo was relevant to my surgery.  I'll leave those enjoyable comments in place and continue now with what I found this morning re Paul Bunyan, who apparently is not totally from Minnesota.


The most famous figure in American folklore began with tall tales in 19th century logging camps. He received his first widespread public attention in Minnesota. But as his popularity grew, states around the country fought over rights to claim him as their own.

Americans know Paul Bunyan as a supersized logger who created Minnesota’s lakes when his bootprints filled with water and dug Lake Superior as a watering trough for his giant blue ox — but also carved the Grand Canyon with his ax. But in the original lumberjack tales, he was “only” about 7 feet tall, said Michael Edmonds, author of “Out of the Northwoods: The Many Lives of Paul Bunyan.”

The earliest reliable account Edmonds found of a logging-camp tale was from the winter of 1885-86 in — brace yourself, Minnesotans — Wisconsin. But Minnesota figures prominently in Bunyan’s journey after that. The first public record of the Bunyan tales appeared in a brief article in a Duluth paper in 1904. Ten years later, a former logger-turned-advertising manager for the Red River Lumber Co. wrote a brochure about Bunyan, further spreading his fame. The company, which moved from northern Minnesota to northern California around that time, took the woodcutting giant as its logo, emblazoning their products with his image, Edmonds said...

During the Depression, resorts and promoters used his name to attract tourists. Finally, starting in the 1950s, Bunyan tales shifted primarily to children’s books. Bunyan grew to represent America’s vision of itself. So which state can claim him as its own? “I don’t think there’s any state that can’t,” Edmonds said.

Great photo of the current "World's Largest Talking Animated Bunyan" at the StarTribune, whence the text.