An elderly woman verbally assaults a person of color (Filipino per CNN) for exercising in a public park.

"Karen," BTW is a perjorative term for a female exhibiting unreasonably demanding behavior.  I don't have an explanatory link.  Someone may know the origin.  Hat tip to reader Tyler who found this well-done detailed history of the term.

Trying again.  I think I muted the original before copying the code because I couldn't stand listening to the old lady.  Incredible abuse.

Trying a third time.  Obviously I don't know how to do this:


Why is it so hard for Karen to mind her own business? from r/PublicFreakout

I give up. It's lunchtime. Go to this link instead (and unclick the mute if it's on)

Addendum:  CNN now has more details about the confrontation -


A woman was caught on video harassing a Filipino American woman as she exercised this week at a Southern California park, the latest in a string of racist incidents captured on video and widely shared on social media.

Officers have not positively identified the other woman but say they have an idea who she may be...  And we also had a second matter that was also brought up from October of last year, for an incident at the mall where it's believed that the same female struck a patron at the mall."..

"So, I was working out -- I like to jump on the stairs and just go side to side, so I was just doing that -- and all of a sudden I see her and she goes around another Asian lady doing Tai Chi and then walks down those stairs and then goes up my stairs and then comes back down and kind of like nudges me on my left shoulder, and that's when I said, 'Oh Jesus,'" Sherry said.

Update:  The video finally made it to YouTube.  The one I've embedded at the top should have sound.

Addendum re "Karen" meme.  A lady with a sense of humor... 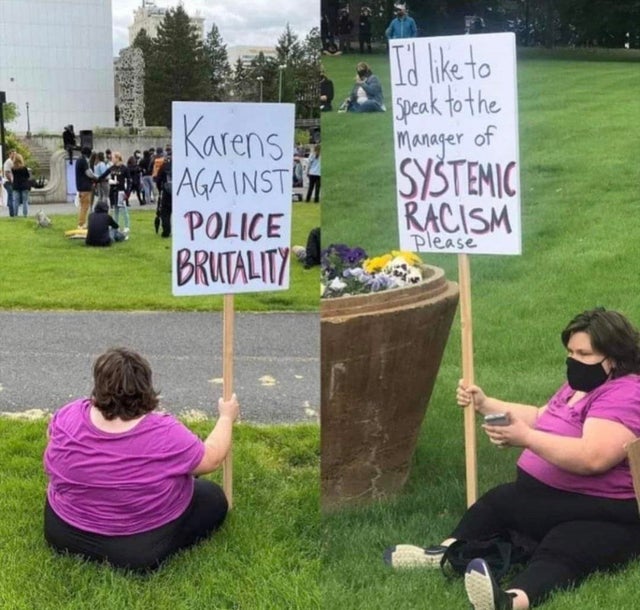