Have you heard about the war between Russia and Saudi Arabia ? Updated

It's an oil war, not a shooting war, but it has worldwide implications.  It was explained at Vox on March 9:


A long-standing deal between Saudi Arabia and Russia — two of the world’s oil-producing powerhouses — fell through over the weekend, sending global markets into a spiral and dashing future economic prospects in the US...

At last week’s meeting, Saudi Arabia, the cartel’s leader, suggested the participants collectively cut their oil production by about 1 million barrels per day, with Russia making the most dramatic cut of around 500,000 barrels a day. Doing so would keep oil prices higher, which would bring in more revenue for nations in the bloc whose economies are heavily dependent on crude exports...

The Russians, wary of such a move for weeks, opted against the plan. It’s still unclear exactly why that’s the case. Some say Russia wants prices to stay low to hurt the American shale oil industry or is gearing up to seize a bigger sliver of Asian and global oil demand for itself...

Saudi Arabia didn’t take too kindly to the Kremlin’s decision and responded by slashing its export prices over the weekend to start a price war with Russia. That brought the price per barrel down by about $11 to $35 a barrel — the biggest one-day drop since 1991...

That was last week.   The war is continuing, and the consequences are global and dramatic.  The world is experiencing an unprecedented drop in oil demand (car travel, airline travel, factory usage) at the same time that Saudi production is ramping upward.  This morning on the Bloomberg channel they announced that WTI has been trading as low as $21 per barrel - a price not seen for about twenty years.

I was amazed to hear one knowledgeable commentator opine that the price of oil could drop to negative levels - i.e. that instead of buying oil, someone would pay someone to take the oil.  This presumably would occur at the producer/refiner level, not at the consumer level - but still...

With prices this low, the U.S. is adding to the strategic petroleum reserve, in part in case of (theoretical) future oil shortages but also to provide a market that U.S. companies can sell their oil to.

Why is this bad?  Lower oil prices = lower gas prices, lower heating oil prices, cheaper travel when it resumes.  Few people will feel sorry for "big oil."  But what happens is that the price shock ripples through and beyond the industry.  There is an old saying that if you can't pay your $10,000 loan from the bank, you're in trouble - but if you can't pay your $10,000,000 loan from the bank it's the bank that's in trouble.  Most U.S. businesses run on credit in expectation of good times ahead.  When oil companies fail, and drilling companies, and equipment manufacturers etc etc, the prospect arises of insolvency not just of the manufacturers, but of the banks they owe money to.


Caught in the maelstrom is Donald Trump, who ignored critics to stand by Prince Mohammed after the Khashoggi murder and has confounded many with his repeated praise of Mr Putin’s leadership. Just as the US president is gearing up for an election battle under the cloud of the Covid-19 outbreak, the Russian-Saudi crude war threatens America’s growing shale industry, hurts debt-burdened US oil majors and exacerbates the pressure on collapsing stock markets.

“We’re in a three-way Mexican stand-off with three big players in the room all saying, ‘if you screw that guy over there, you are screwing me over, so I’m going to screw you over,’” said Michael Stephens, an associate fellow at the Royal United Services Institute. “It’s a strange triangular discussion from which no side wants to back down and all are going to feel the pain.”

More at the link, which I encourage everyone to read.

Addendum:  Just found this two-day-old article at CNBC citing the CFO of BP stating that oil demand could be negative in 2020.

And this article discussing negative oil prices (depends on the type of oil).

Update:  Ten days later, the carnage in the oil industry continues, as noted in this Bloomberg Opinion piece:


At the point we’re now at, postponing the oil-price war won’t make a lot of difference for an industry that’s already breaking down under the weight of demand destruction. With prices hitting a 17-year low on Monday, it’s too late to use diplomacy and artful negotiations to share the burden of output cuts that are now inevitable.

The pumping free-for-all unleashed by Saudi Arabia and Russia is important for the long-term shape of the oil industry, but, as my colleague Javier Blas  pointed out here, it’s a sideshow to the havoc being wrought by the lockdowns crippling economies worldwide in response to the coronavirus pandemic. Forecasts of a catastrophic drop in oil demand abound, with estimates of a whopping 20% year-on-year reduction in global consumption in April becoming more common. That’s 20 million barrels a day, equivalent to the entire consumption of the United States. And even those gloomy views may be too optimistic, according to Goldman Sachs.

It would be impossible for any small group of producers to mitigate that kind of impact by reducing output, unless Saudi Arabia and Russia were both to slash their production to almost zero. And that’s not going to happen... 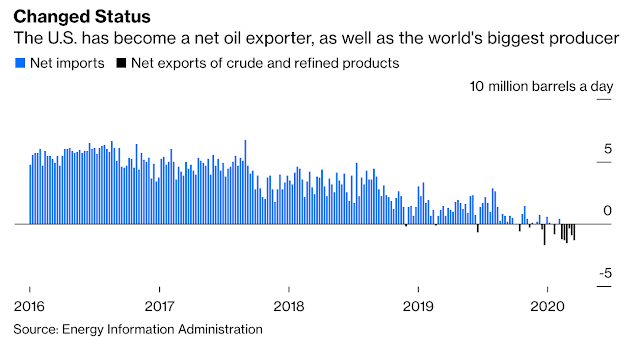 The U.S. is now the world’s biggest crude producer, pumping 13 million barrels a day — more even than Saudi Arabia can supply if it opens its taps fully...

As it stands at the moment, OPEC is not due to meet until early June, and whether the cartel’s external allies including Russia join them in an enlarged OPEC+ shindig remains to be seen. No matter, any action agreed then wouldn’t have an impact until July, at the earliest. Even an agreement reached tomorrow would have little impact until May, with April crude sales now largely completed.

By then storage tanks around the globe will be close to capacity; ships full of unwanted oil will be floating in safe anchorages; and producers will be forced to shut wells because they have simply run out places to put any crude they pump out of the ground.

The economic pain is going to be felt in the oilfields from North Dakota to Texas and in the offshore facilities.  But consumers may see gasoline prices below $1.00 per gallon.


Even if the quarrel between Saudi Arabia and Russia gets resolved, at this point, demand for oil has collapsed and will not soon recover. An industry insider told me his firm is forecasting that oil will likely drop to $10 per barrel and stay there. Consider what this means for countries such as Libya, Nigeria, Iran, Iraq or Venezuela, where oil revenue makes up the vast majority of government revenue (often of the entire economy) — but they make a profit on oil sales only at prices of more than $60 a barrel. Expect political turmoil, refugees, even revolutions, on a scale we have not seen for decades — not since the last phase of $10 oil, when the Soviet Union collapsed...