The dark side of raising butterflies 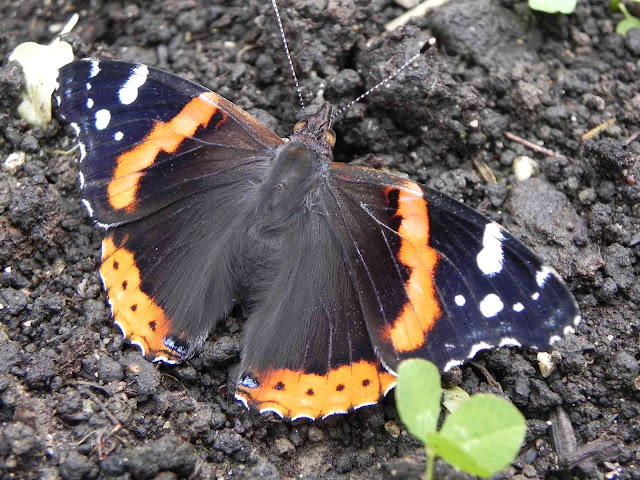 Over the past four years I've written quite a few upbeat posts about the joys of raising caterpillars in order to release butterflies (we do this just for they simple pleasure of watching them fly away - not for any commercial gain).  It's not always fun and games, because as Tennyson said, Nature can be "red in tooth and claw."  This post will delineate one of the potential downsides - parasites.

The most common parasite we encounter, because we raise so many Monarchs, is Ophryocystis elektroscirrha, a protozoan that turns the chrysalis into black goo.  More about that some other time (maybe).  Today I'll post the life cycle of the Red Admiral (Vanessa atalanta) and a parasitic fly.

The butterfly is shown at the top.  It's common (sometimes focally abundant), and uses a variety of plants as hosts for it eggs, most noticeably nettles and false nettles.  Two years ago I wrote about my painful misadventure when I wandered into the neighborhood nettle patch in search of Red Admiral eggs and caterpillars.

But I did find some.  The eggs look like little green barrels on the nettle leaves - 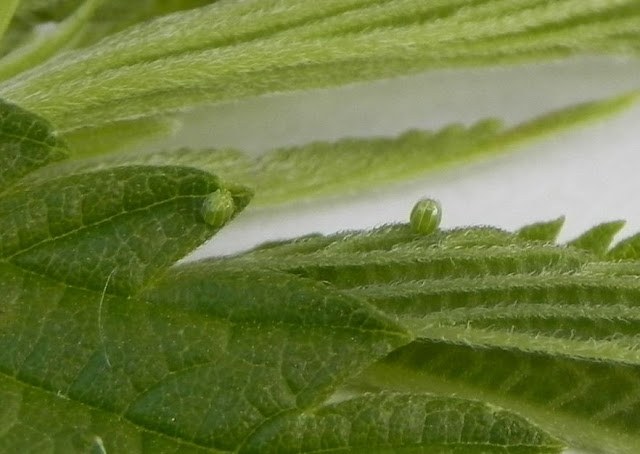 - and the caterpillar that emerges, after passing through a cute little fuzzy stage, appears to be formidably protected - 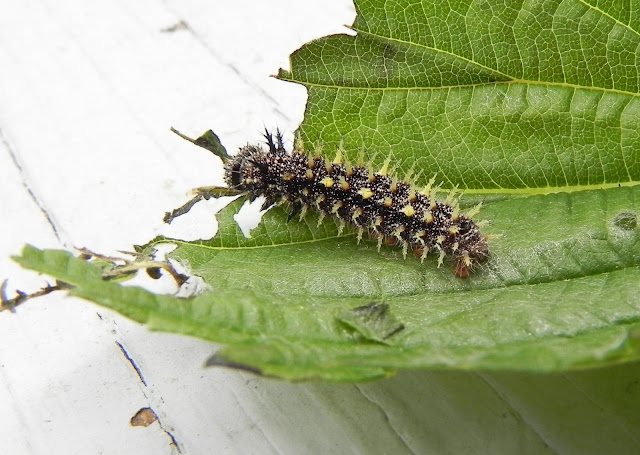 - by an array of barbed spines along its body, evolved over millennia to fend off a variety of predators.  I had a dozen or so of these caterpillars, who voraciously consumed nettle leaves, forcing me back (warily) into the patch (wearing long sleeves, wielding long-handled forceps to grab the leaves) several times.  Eventually the cats were big enough to pupate, forming chrysalises in their container.  I got ready to photograph the emerging butterflies.

To my dismay, what emerged from almost all of the chrysalises was not a beautiful butterfly, but rather a fly larva.  I'll put the rest of the photos "below the fold" because of their "ick" factor in deference to those of you who are eating lunch at work.
One morning holes appeared in the side of the chysalises, oozing a reddish liquid - 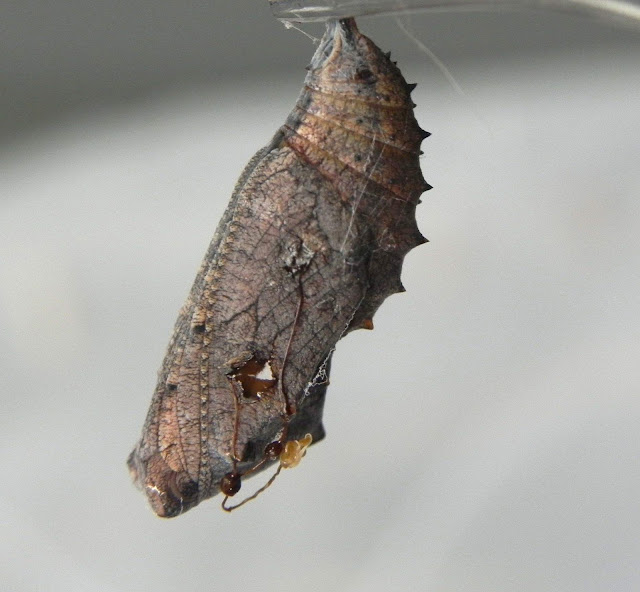 - and falling to the bottom of the container were maggot-type larvae: 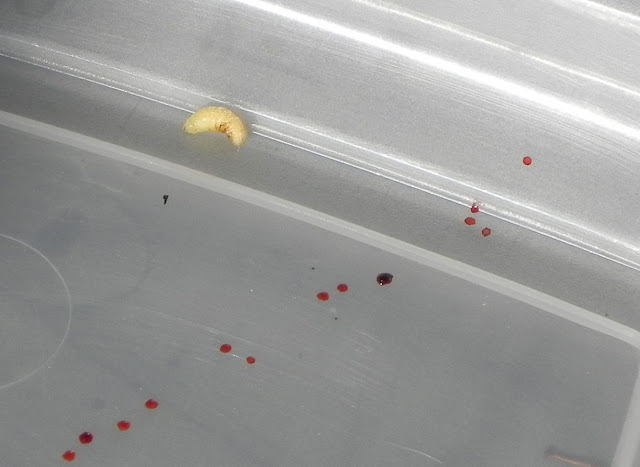 I left them alone (not knowing what else to do), and after a while, they had transformed into their next stage (perhaps in the wild they would have wiggled underground to do so): 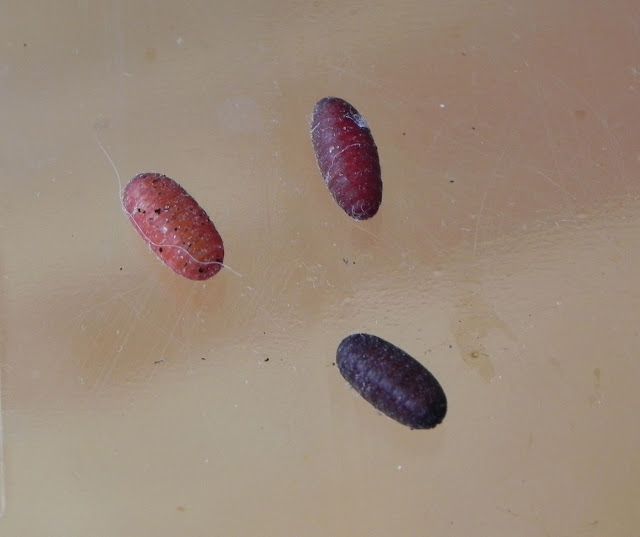 I don't remember how long I kept them - a couple weeks, I think - and then one morning I found a fly crawling to the top of the container, dragging behind it the empty casing: 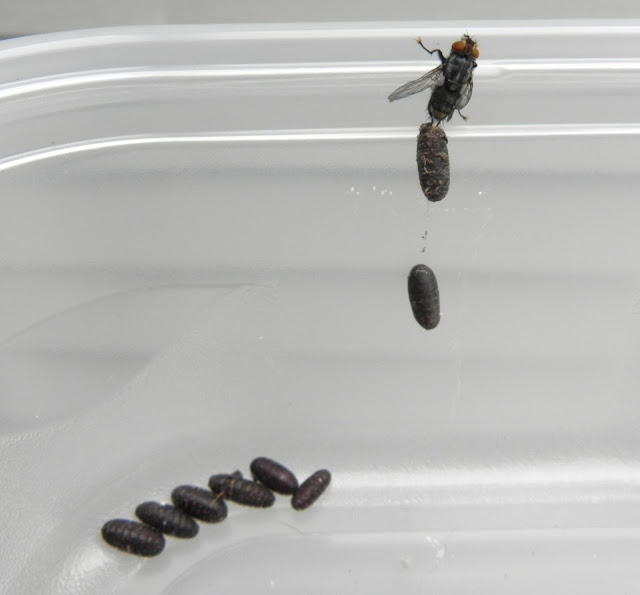 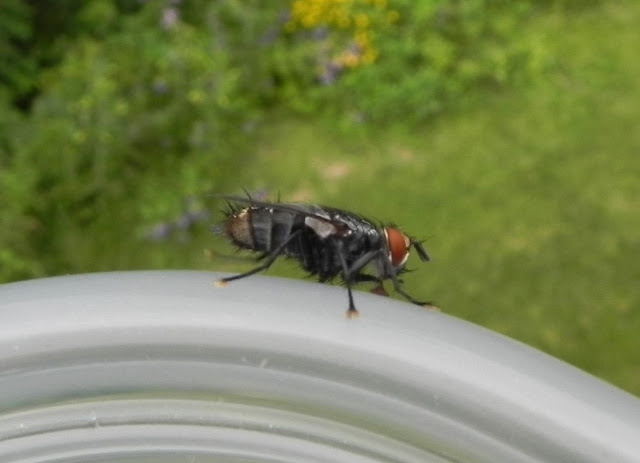 It looked to me to be an ordinary "house fly," but given the circumstances I presume it is a tachinid fly - a well-known parasitoid of butterflies.  Interestingly, when I returned later to the nettle patch, I began to notice that the flies were there - 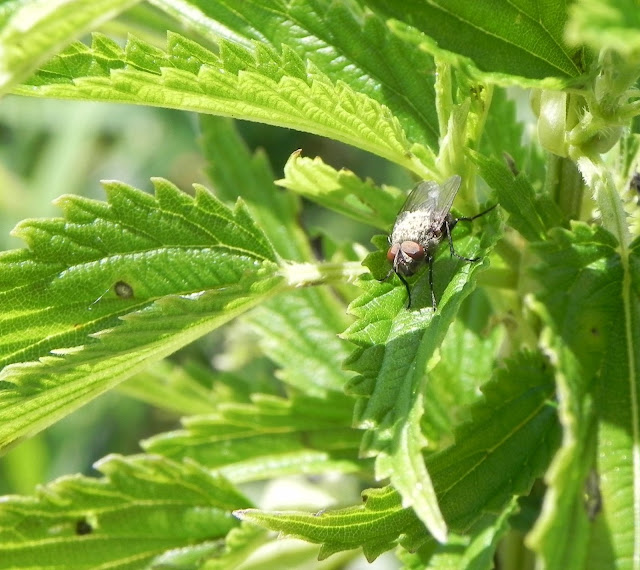 - presumably hunting for caterpillars.  Or perhaps they lay their own eggs on the leaves and the caterpillars ingest them.  I don't know.

The whole experience was "different" and informative - not much "fun" for a butterfly enthusiast, but a useful lesson in the checks and balances of the natural world.  And it gave me a whole new perspective when I later rewatched the 1986 Jeff Goldblum/Geena Davis version of "The Fly" (two screencaps below):


p.s. - word for the day, learned today: a "parasitoid" develops inside a living host, ultimately killing it, vs. a "parasite" that typically does not kill the host.