Wherein I learn about "gestation crates"

Prompted by an article in the Wisconsin State Journal...


Madison-based Oscar Mayer said Friday it will work with its pork suppliers to make sure pregnant sows have more room. Oscar Mayer does not raise its own pigs.

By the end of 2022, the company plans to obtain pork from suppliers who can provide pregnant sows with housing that "allows for greater movement for the animal, while ensuring their comfort," instead of traditional stalls.

Pork providers Smithfield and Hormel have pledged to stop using the confining gestation crates by 2017, and Cargill already is 50 percent crate-free, the organization said.

... I looked up a "gestation crate" at Wikipedia:


A gestation crate, also known as a sow stall, is a 2 metres (6.6 ft) x 60 centimetres (2.0 ft) metal enclosure used in intensive pig farming, in which a female breeding pig (sow) may be kept during pregnancy, and in effect for most of her adult life. 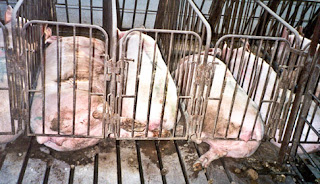 In the European Union, the crates are being phased out by 2013 after four weeks of pregnancy. They are already banned in Sweden and in the UK, and will be banned in Denmark in 2014. In the US, they have been banned in Florida since 2002, Arizona since 2006 California since late 2008 and the latest being Rhode Island from June 2012, making it the 9th state in US to enforce the ban...

Between 60 and 70 percent of sows are kept in crates during pregnancy in the United States, each pregnancy lasting four months, with an average of 2.5 litters every year. Sows, which can weigh 600 pounds (270 kg), spend most of their three or four years of adult life in crates, giving birth to between five and eight litters. As the sows grow larger, they no longer fit in the crates, and must sleep on their chests, unable to turn, until they are slaughtered.

More at the link for those interested.  Photo via Farm Sanctuary.