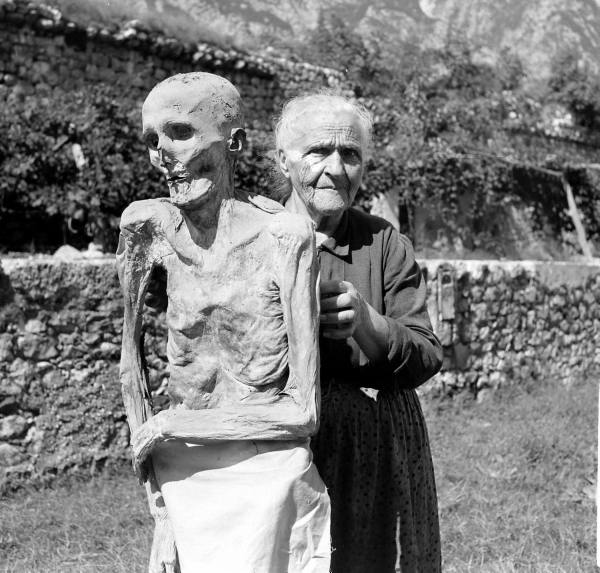 For hundreds of years, a mystery surrounded the cathedral of Venzone, a small city in the province of Udine, Italy. Instead of decomposing normally, bodies buried in the tombs beneath the cathedral were perfectly preserved and still recognizable decades later, a fact which led the townspeople to periodically retrieve and commune with their dead loved ones. In modern times, scientists finally traced the source of this wonder to Hypha tombicina, a microscopic, parasitic fungus that rapidly dehydrates the bodies before decomposition can even begin.

That's the explanation at Wondercabinet, repeated at several other sites in my brief search.  Personally I find it hard to understand how a fungus can dehydrate a corpse; I prefer this explanation at Virtual Tourist:


They were already found in 1647 during works in the cathedral.  Venzone lies atop limestone bedrock. Groundwater in such regions is usually alkaline, an environment hostile to putrefaction. During floods, alkaline waters likely seeped through dirt floors in tombs 1 to 10, preserving the cadavers. Vaults 11 to 17 had sealed stone floors. Moreover, floodwaters in tombs 1 to 10 drained quickly through the porous limestone. Coffin wood from those vaults possessed just 7 percent water. In such aridity, water-soaked humans would have dried rapidly into mummies.

Venzone is not at high altitude, but desiccation as a preservative would accord nicely with the cloud mummies of the Andes and some that I seem to remember from Artic locales.

What's most intersting to me is not the mummification per se, but the respect accorded to the mummies by local villagers.   Some of the photos seem to be from a museum, so part of this may be tourist-income-related, but the respect predates that.

Incidentally, for those interested, Virtual Tourist got its information from a web page entitled "The Mystery of Holy Incorruption" which offers modern interpretations of the "mysterious preservation of saints' bodies."  That looks blogworthy on its own - bookmarked for the future (sigh...).