A story at the Wall Street Journal reports that a bumper crop of lobsters has caused the wholesale price to plunge:


Harbors up and down the coast of Maine are filled with idle fishing boats, as lobster haulers decide that pulling in their lobster pots has become a fruitless pursuit. 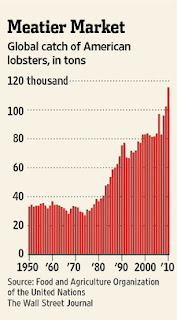 Prices at the dock have fallen to as low as $1.25 a pound in some areas—roughly 70% below normal and a nearly 30-year-low for this time of year, according to fishermen, researchers and officials. The reason: an unseasonably warm winter created a supply glut throughout the Atlantic lobster fishery.

Those prices have officials and lobstermen concerned about the fate of one of the state's most vital industries. "For some people it will be disaster, they are going to go bankrupt," said Bob Bayer, director of the Lobster Institute at the University of Maine.


Retail lobster prices in Maine have started to fall along with the glut, and Mr. Bayer said that some fishermen have begun selling lobsters out of their trucks for as low as $4 a pound. But consumers elsewhere in the U.S. aren't likely to see bargains. The Maine lobsters that currently are in season can't be shipped long distances due to their soft shells, and retailers have other fixed costs that limit big price drops.

The story reminds me that many years ago my wife and I have vacationed (twice) at Mount Desert Island in order to hike and bike the trails of Acadia National Park.  We prefer to eat "where locals eat" rather than in tourist restaurants, and we discovered a fantastic place for lobster - the West Street Cafe.  I think we had the "early bird special" every night for a week.  A big lobster and a bucket of butter.  We have very pleasant memories of those vacations - especially bicycling the carriage trails.

BTW, according to the story, the reason for the population surge isn't just warmer ocean temperatures.  There has also been "overfishing of cod and haddock, their main predators."

p.s. - those of you who live in the area or visit frequently, if you have tips for dining, feel free to leave them in the Comments, in case we ever go back...