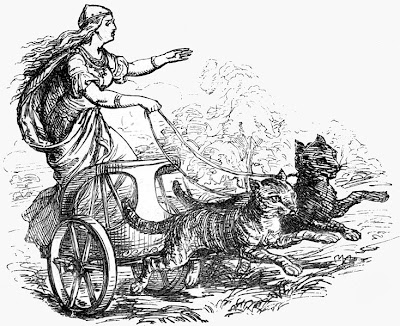 
[Freyja is the most famous of the goddesses. She has in heaven a dwelling which is called Fólkvangr, and when she rides to the battle, one half of the slain belong to her, and the other half to Óðinn... When she goes abroad, she drives in a wagon drawn by two cats.

Further details on Viking cats from the Viking Answer Lady:


It might seem absurd to imagine a cart drawn by cats, until one realizes that Viking cats were not your standard Felis domesticus -- they were the Skogkatt (Norwegian, meaning literally "Forest Cat"), a wild breed native to the North... The Skogkatt is a large breed, known for their strong bones and muscular forms.

Ailurophiles will find more interesting reading at the link. Via Finest Kind Clinic and Fishmarket.