The miniature coffins of Arthur's Seat

Arthur's Seat is a peak in Edinburgh, Scotland, on whose summit is an ancient hill fort. In 1836, five boys hunting rabbits found seventeen miniature coffins, described as follows by a report in the London Times:


That, early in July, 1836, some boys were searching for rabbits’ burrows in the rocky formation, near Edinburgh, known as Arthur’s Seat. In the side of a cliff, they came upon some thin sheets of slate, which they pulled out.

In the coffins were miniature wooden figures. They were dressed differently in both style and material. There were two tiers of eight coffins each, and a third one begun, with one coffin.

The extraordinary datum, which has especially made mystery here:
That the coffins had been deposited singly, in the little cave, and at intervals of many years. In the first tier, the coffins were quite decayed, and the wrappings had moldered away. In the second tier,  the effects of age had not advanced to far. And the top coffin was quite recent looking. 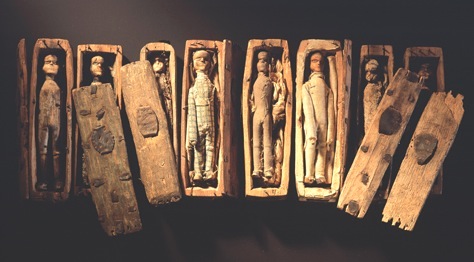 Here is some additional information, from A Fortean in the Archives:


Fewer than half of them survived; the Scotsman, in the first known published account (16 July 1836), explained that “a number were destroyed by the boys pelting them at each other as unmeaning and contemptible trifles.”..

Several potential explanations were advanced – the most popular were that the burials were part of some spellwork, and the work of witches, or that they represented mimic burials, perhaps for sailors lost at sea...

It is certainly credible that the decayed coffins were actually those that occupied the lower tier in the burial nook, and so were most exposed to water damage. If that’s the case, there is no need to assume that the burials stretched over many years. This matters, because the only comprehensive study yet made of the “fairy coffins” strongly indicates that all postdate 1800 and that the odds favour a deposit or deposits made after about 1830 – within about five years, in other words, of the discovery of the cache...

As to who precisely did the carving, Simpson and  Menefee point out that “the most striking visual feature of the coffins is the use of applied pieces of tinned iron as decoration.” Analysis of this metal suggests that it is very similar to the sort of tin used in contemporary shoe buckles, and this in turn opens the possibility that the coffins were the work of shoemakers or leatherworkers, who would have had the manual skills to make the coffins, but would have lacked the specialist carpentry tools needed to make a neater job of it.

Much more information and speculation at the link.

Photo of coffins from the National Museums Scotland.