What do firefighters do all day? 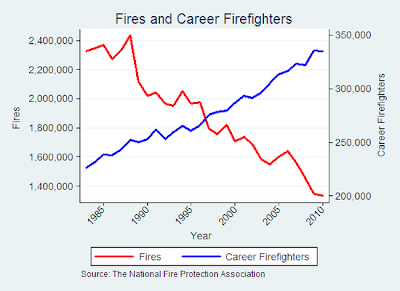 One has to tread carefully when presenting information that can be interpreted as critical of "civil servants," be they policemen, public school teachers, or, as in this case, firemen.  With that in mind, I'll note at the start that the embedded graph is deceptive, because the vertical scale has been truncated.  The trend certainly is valid, but the implied amplitude has been exaggerated.  Now, on to the text, excerpted from Marginal Revolution, via The Dish:


Taxpayers are unlikely to support budget increases for fire departments if they see firemen lolling about the firehouse. So cities have created new, highly visible jobs for their firemen. The Wall Street Journal reported recently, “In Los Angeles, Chicago and Miami, for example, 90% of the emergency calls to firehouses are to accompany ambulances to the scene of auto accidents and other medical emergencies. Elsewhere, to keep their employees busy, fire departments have expanded into neighborhood beautification, gang intervention, substitute-teaching and other downtime pursuits.” In the Illinois township where I live, the fire department drives its trucks to accompany all medical emergency vehicles, then directs traffic around the ambulance—a task which, however valuable, seemingly does not require a hook-and-ladder.

Moreover, most of the time the call is not for a fire but for a minor medical problem. In many cities, both fire trucks and ambulances respond to the same calls. The paramedics do a great job but it is hard to believe that this is an efficient way to deliver medical care and transportation.

I can vouch for the type of incident described, because at the senior living complex where my mother previously resided, both an ambulance and a fire truck responded to all non-fire emergencies.  I never understood the justification for this duplication.

See this link for a more detailed discussion.