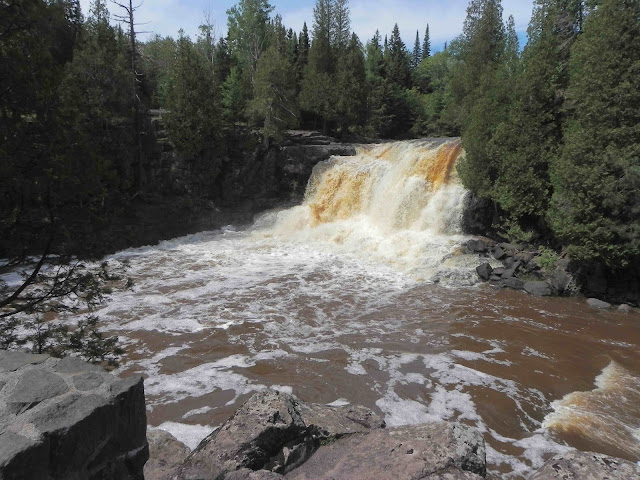 As part of my ongoing project to blog the variety of stonework created by the Civilian Conservation Corps during the Great Depression,  I recently made a quick daytrip to the North Shore of Lake Superior to visit Gooseberry Falls State Park.  About halfway between the towns of Two Harbors and Silver Bay, the park is located where the Gooseberry River tumbles down to Lake Superior via a series of cascades.

The photo above shows the "Upper Falls" just north and west of the highway.  I have visited the park many times, but most often in the dryness of midsummer; recent rains before this visit had swollen the river to an impressive degree.

When the Roosevelt administration set up the CCC, its prime directive was (as the name implies) conservation of farmland, water, and wildlife.  A secondary goal was to create recreational facilities nationwide (in part so that the non-farming citizenry could see a practical and enjoyable return for the government's expenditures).  Gooseberry Falls State Park provides a good example of recreational development.

In the 1930s, the very scenic North Shore of Lake Superior was just becoming accessible to the general public.  It had previously been used by industry (fur trade, iron ore, timber), but the completion of Highway 61 from Duluth to the Canadian border now gave the public access and kick-started the tourist industry in this region. 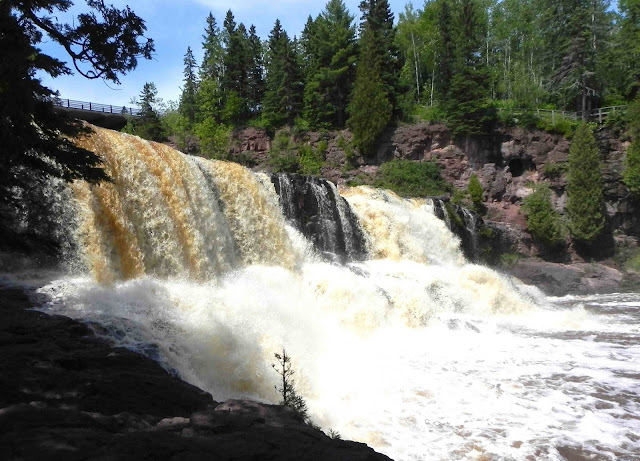 The highway crosses the river between the Upper Falls and the Middle Falls, shown here (modern bridge visible top left).  In 1933 the CCC was tasked with enhancing the tourist experience.

With the rise of North Shore tourism in the 1920s, there was a concern that the highly scenic North Shore would be accessible only to the rich. As a result the Legislature authorized preservation of the area around Gooseberry Falls in 1933. The following year, the Civilian Conservation Corps (CCC) began to develop the park. CCC crews built the park's stone and log buildings and the 300-foot long "Castle in the Park" stone retaining wall. They also laid out the original campground, picnic grounds and trails.

The largest project (and the one I'm focusing on today) is a feature variously referred to as "the wall" or "the castle."  Adjacent to the highway where it crosses the river, a "scenic overlook" was constructed, with a parking concourse for tourists' cars, including a stone retaining wall with a walking promenade.  Vehicle parking was later moved away from the highway into the park itself, but the wall remains.  Here's the southern end: 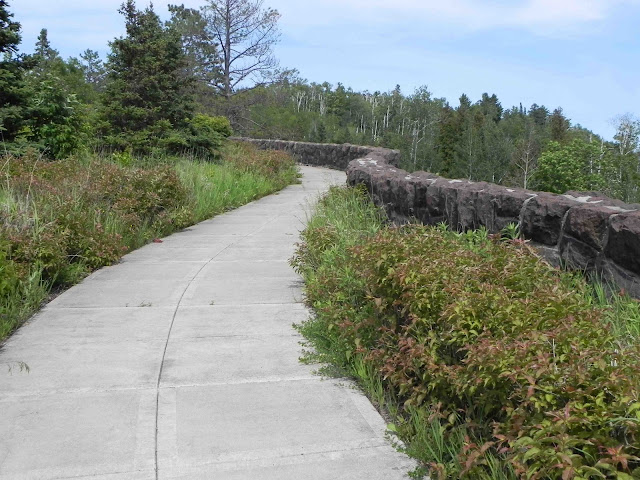 From this vantage point it's not any more remarkable than the thousands of other walls created by CCC stonemasons around the country.  At intervals the continuity of the wall is interrupted; I don't know why the holes are blocked with iron bars - presumably to keep rugrats from traversing the gap (?). 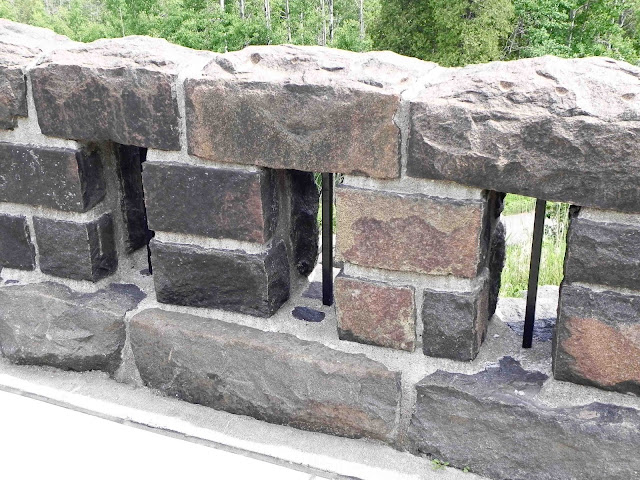 As you walk along the parapet, signage explains local geology and some details of the construction.  The wall was built between 1936 and 1940 and is 300 feet long, 15-25 feet high, and 12 feet wide at the base.  Stone was quarried locally, and the CCC enrollees were supervised by two Italian stonemasons. 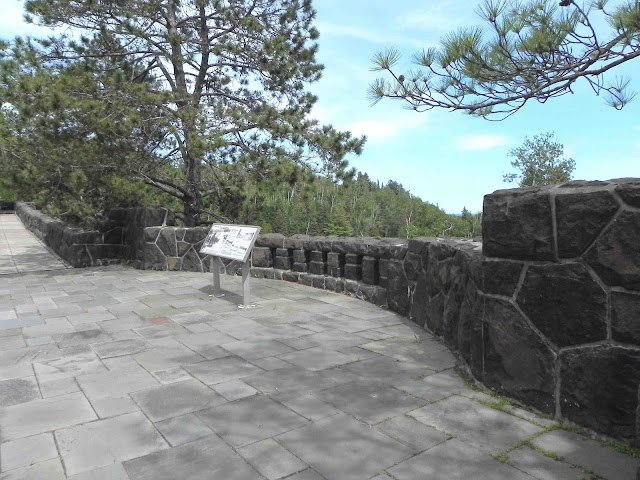 I think the professionalism of the work is best exemplified by how tightly fitted the stones are.  After they were cut at the quarry and transported to the site, they were hand-cut to shape, and are not boringly-repetitive rectangular blocs; they are cut into a variety of polygons and sealed with comparatively modest amounts of cement: 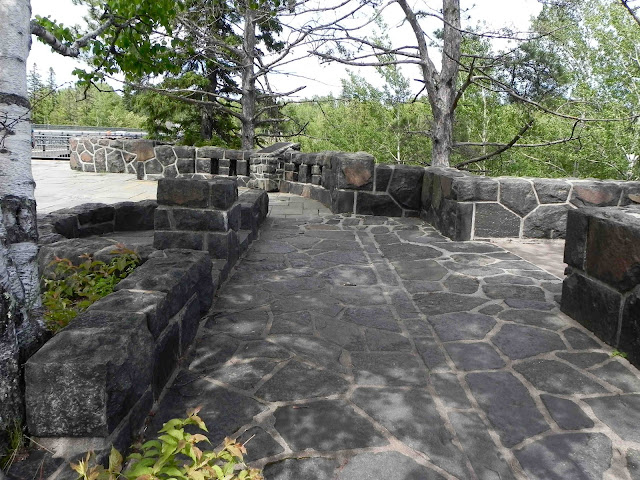 After the 1930s-1950s visitor parked the car on the concourse, access to the Middle Falls was via this immense staircase: 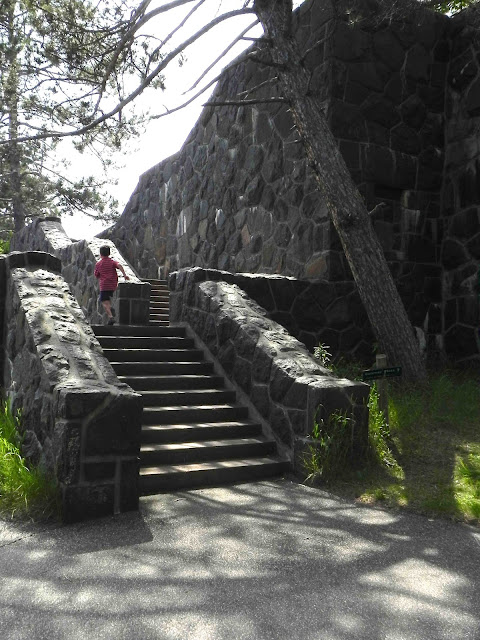 After you reach the bottom of the stairs, the immense size of the wall can be better appreciated.  Again, what impresses me is the paucity of "small" blocks to fill the spaces between the large ones.  I suspect the stonemasons who supervised the city kids in the CCC had decades of experience building dry stone walls that would remain stable even without mortar. 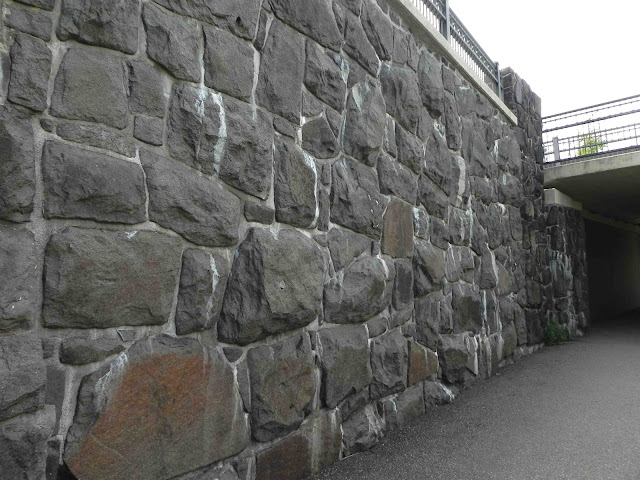 Some of the blocks weigh over 7 tons apiece, and had to be lowered from the road above by a derrick (which had to be constructed by the camp blacksmith).

One final view, as I backed away from the wall, shows more of the fitted blocks, and why the wall is often likened to a "castle." 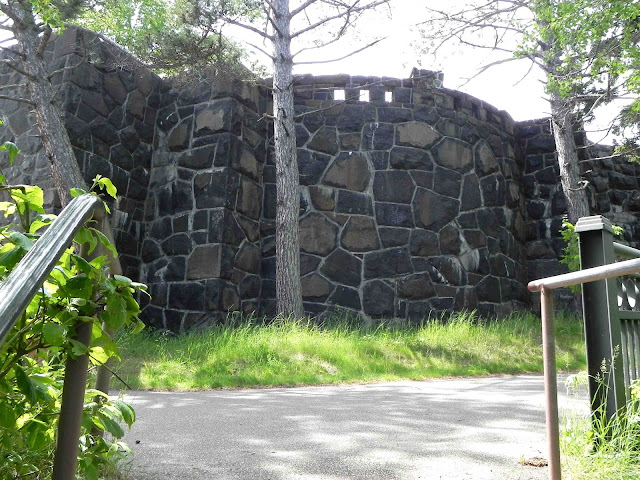 As one continues down the park trails toward the Middle and Lower Falls (and eventually down to Agate Beach), there is a modern statue honoring the young men who did the work: 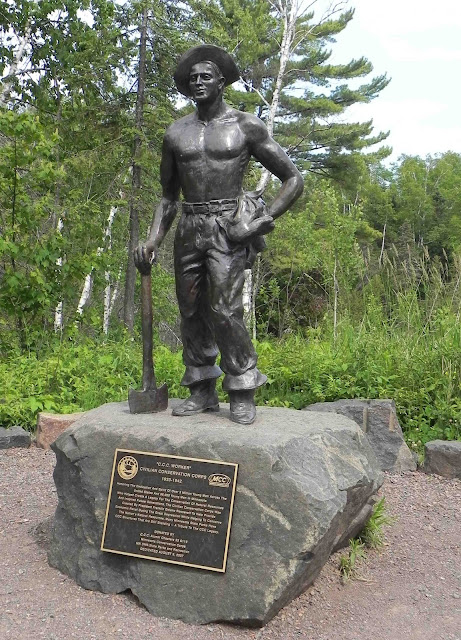 These kids and young men (and some old men) were harvested from the unemployment lines of the cities, transported to barracks in farm and wilderness areas, fed and clothed, and spent every day building the infrastructure that we still enjoy.  I have immense respect for this program; in my view it was public relief ("welfare") done correctly.

Some final observations not related to the CCC.  A park employee snapped this photo of the Lower Falls on June 12, five days before I arrived.  By the time I arrived on the 18th, the river was considerably higher.  I spent a day at the park (and rockhounding on some nearby beaches) and would have spent another day, but the weather turned worse, with predictions of rain, so I headed back to Wisconsin. 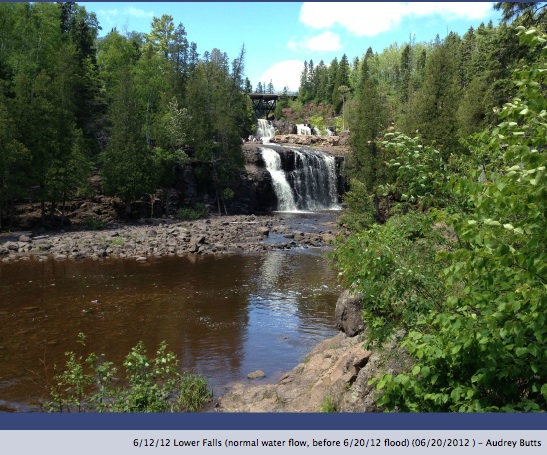 The day I left was the start of a historic deluge that many of you may have seen on the national news.  Duluth received 8" of rain (two months' worth) in that one storm, and the Two Harbors area by the park received about 10".  Here's how that rainfall affected the river. 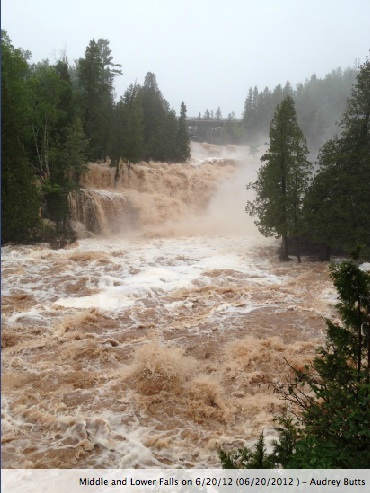 Many roads and hiking trails in the area were obliterated by the floodwaters.  More photos of the North Shore flooding here.

I'll be back - hopefully later this summer, because there's lots more CCC stonework at the park to blog, including some spectacular buildings.  Further information is available in the Gooseberry Falls CCC Legacy self-guided tour.