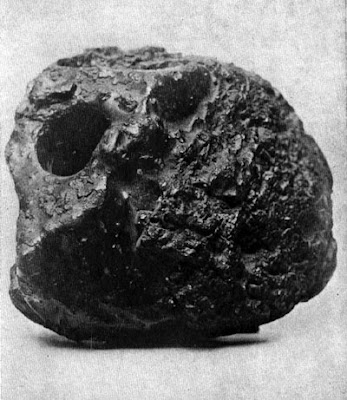 A coal torpedo. This example was prepared as a model, with a partial coal dust coating and the plug left out. It was found in Jefferson Davis' office by Union General Edward Ripley when Union forces captured Richmond in April 1865.

The coal torpedo was a hollow iron casting filled with explosives and covered in coal dust, deployed by the Confederate Secret Service during the American Civil War, and intended for doing harm to Union steam transportation. When shoveled into the firebox amongst the coal, the resulting explosion would at the very least damage the boiler and render the engines inoperable. At worst, a catastrophic boiler explosion would kill crewmen, plus passengers, start a fire, perhaps, even sink the vessel.

More details at Wikipedia on the development and deployment of these devices (and a note that in the mid-nineteenth century the word "torpedo" was used for any booby trap or IED).  This part was interesting:


Courtenay[the inventor] had traveled to England in 1864 and remained there until 1867, trying to sell the "secret" of the coal torpedo to foreign governments... The Times in 1873 reported rumors that disreputable ship owners were purchasing coal torpedoes to put in their own ships as a form of insurance fraud, so that over-insured ships and cargo would sink while far out at sea, leaving no evidence. Other reports scoffed at the rumors... the reports stirred up popular interest in various supposed methods of sabotaging ships, and the coal torpedo even made an appearance in the short story, "That Little Square Box," by Arthur Conan Doyle...