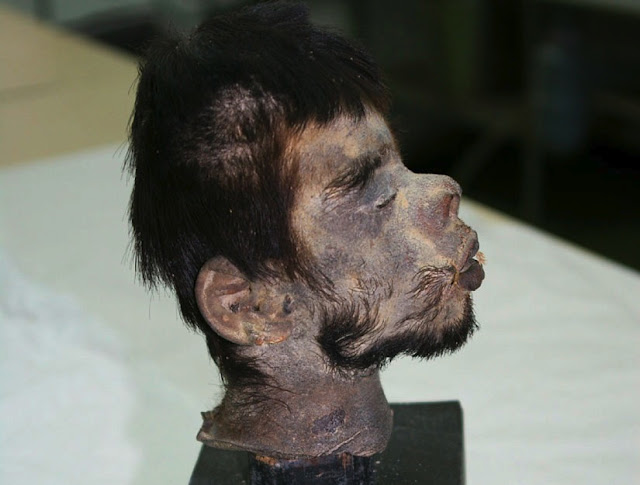 Not all of them are fakes:


The study, published in the latest issue of Archaeological and Anthropological Sciences, marks the first successful effort to unveil the genetic make-up of a shrunken head...

For the study, she and her colleagues used DNA testing and other techniques to examine the authenticity and possible cultural provenance of a shrunken head displayed at the Eretz Israel Museum in Tel Aviv. The head remains in an incredible state of preservation, with the deceased man's hair, facial features and other physical characteristics intact.

Many shrunken heads are forgeries, with some 80 percent suspected to be fakes. The late 19th through the 20th centuries saw a rise in manufacture of such fakes for profit...

"The shrunken head we studied was made from a real human skin," Kahila Bar-Gal said. "The people who made it knew exactly how to peel the skin from the skull, including the hair," she added, mentioning that it was also salted and boiled.

The researchers determined that the skin belonged to a man who lived and died in South America "probably in the Afro-Ecuadorian population." The genes reveal the victim's ancestors were from West Africa, but his DNA profile matches that of modern populations from Ecuador with African admixture.