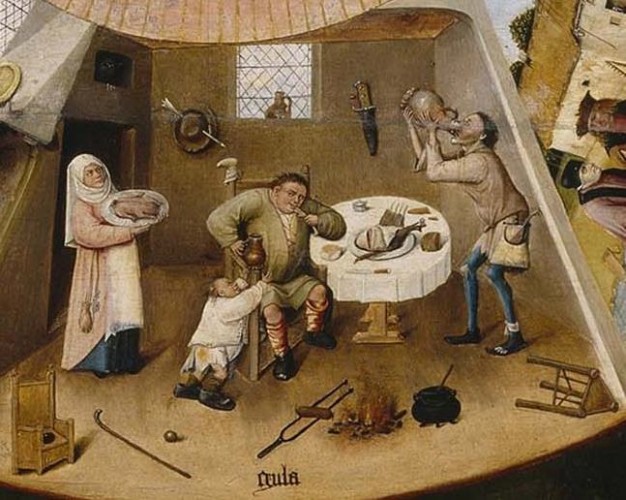 My post about mobility scooters may have given some viewers the wrong impression that I was mocking obesity.  That's not quite right - I was mocking the behavior (fast food consumption), not the body habitus.

Yesterday I found an article at Feminine Beauty which delineates the stigmatization of obesity in medieval times.  I had not thought about this before, and would have assumed that obesity in a time of plague and malnutrition would have been viewed as a sign of health and "Rubenesque" beauty.  But, at least in Christian Europe, there was a crossover with the perceived sin of gluttony:


In his letter to the Philippians, Paul excoriated, "the enemies of the cross of Christ whose end is destruction, whose god is in their belly". This message that served as a basis for the classic definition of gluttony which has achieved signal importance in Christian thought. Tertullian in the third century, ascribed Adam's eating of the apple to gluttony, which he accorded as important a role, in the Fall, as the currently more familiar sin of pride. Both Augustine in the fifth century and Gregory I in the seventh century, incorporated gluttony into their developing definition of the Seven Deadly Sins.  Reflecting the rarity of obesity, gluttony was not associated with it during this period, but the stage was set for such linkage when enough food became available.

More at the (pdf) link, via Medievalists.net.