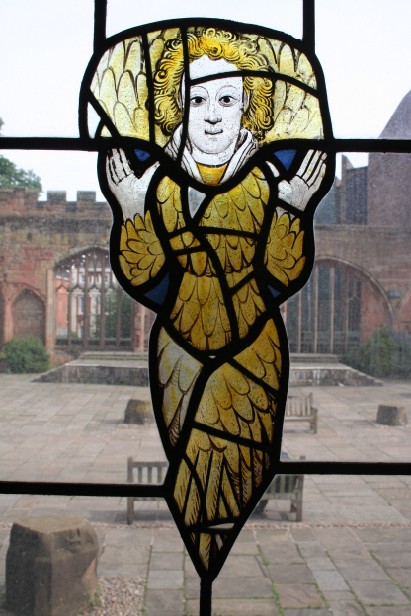 The West Midlands city of Coventry was a prosperous town during the Middle Ages, a major center of the textile trade, and by the 14th century the fourth largest city in England. It had two churches, the 12th century cathedral in St. Mary’s Priory, which was destroyed in Henry VIII’s dissolution of the monasteries in 1539, and St. Michael’s, a 14th century Gothic church that was the largest parish church in the country. The guilds saw to it that St. Michael’s was packed with top quality stained glass...

In 1939, with World War II looming on the horizon, the stained glass panels were removed from the cathedral windows as a precaution to prevent their destruction in any German bombing raids. Coventry was replete with industrial targets both civil and military, so there was little doubt that it would see action. The glass was packed into 30 crates and stored in the cellar of the rectory in the small village of Hampton Lucy...

Coventry Cathedral suffered multiple direct hits. Firefighters were able to put out the first fire of the evening, but as the bombing progressed that night, the fires became impossible to contain. By the time the all-clear sirens rang the next morning, there was nothing left of Coventry Cathedral but smoldering ruins. A few walls and the tall spire were all that remained. Those ruins are still on the spot. A new cathedral was built in Modernist style right next to it, with the ruins as a consecrated garden space dedicated to peace and reflection...

Digital imaging software will be required to reconstruct window images, because the panes were removed and stored without annotations of their original placement.  More details at The History Blog.

I found the image at a fantastic site for those of you interested in art or in the medieval era - Vidimus "the only on-line magazine devoted to medieval stained glass."  Their extensive discussion of the Coventry stained glass restoration is in Issue 33.

For other interesting material, just click on their "back issues" and then "feature."  Enjoy.