What will happen when the Ogallala runs dry ? 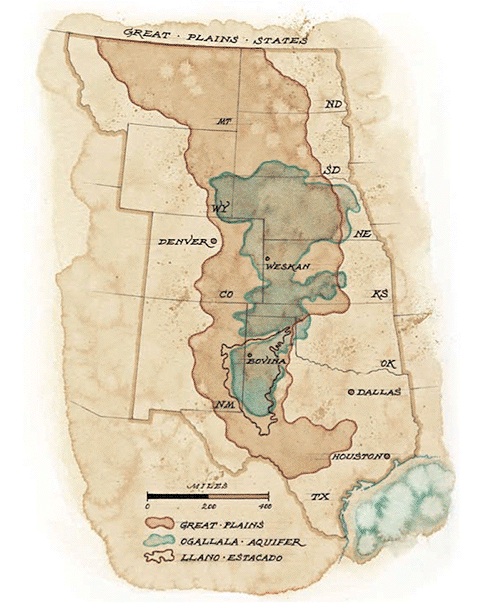 Mulligan began laying out a series of poster-size maps of the Panhandle. The first showed the base of the aquifer in burgundy. During the late Tertiary Period, he explained, the region we know as the Great Plains wasn’t composed of plains at all—it was a stony terrain of cliffs and valleys. Gradually that surface was buried by erosion sediment from the Rockies, which blanketed the region with the smooth surface of today’s plains. But underneath, the hills and valleys of the prehistoric landscape remain, forming the bottom of the Ogallala Aquifer.

Mulligan spread out a second map on top, which showed the same region, but in shades of blue instead of burgundy. “This is the saturated thickness of the Ogallala in 2004,” he said. “So that’s basically the available water.” The contours of the prehistoric landscape remained clear: where there had been hills, the water was shallow, and where there had been valleys, the water was deep.

Next Mulligan spread out a map recording the impact of wells, which were represented with hundreds of tiny dots. The burnt-orange shading on the map indicated a rapid rate of depletion. Mulligan said, “What you’re looking at is a drawdown on the order of five to six feet per year. So over the last fifteen years, it’s gone down eighty, ninety, one hundred feet.”

None of which, he went on, is likely to come back. For complex reasons involving wind, weather, and soil composition, the Ogallala does not recharge in the way one might expect. In fact, of the eight states above the aquifer, only Nebraska, with its sandhill dunes, is permeable enough to contribute any serious replenishment.

Now Mulligan spread out the last two maps of the region. The first was covered with crimson spots. “So what we did is, we highlighted all the areas that are less than thirty feet,” he said. “Thirty feet is kind of a magic number. You’re down to so little water that you’re not going to be able to pump nearly enough.” The map was almost a quarter red. “So that’s 2004,” he said, turning, “and this is 2030.”

In the last map the Panhandle was nearly all red. “I look at that,” Mulligan said, “and I can only surmise that there will be very little irrigated agriculture on the high plains twenty years from now.”

“It’s hard to imagine what there will be,” I offered.

Mulligan smiled. “Just because we’re all born into this, we think that’s the way it’s supposed to be. But our human perspective is very biased.”

Text excerpt and image from a fascinating article in this week's Harper's Magazine, entitled "Broken Heartland.  The looming collapse of agriculture on the Great Plains."

None of this is particularly "news."  I believe it's been known for decades that the water level in the aquifer is declining and will eventually be depleted.  The Texas/Oklahoma area cited above is particularly susceptible to depletion; there are other maps at Wikipedia showing the depth (and drawdown) of the aquifer in more northern states.  But with continued irrigation for agricultural purposes, it will gradually run dry.

What happens then?  That's what the article is about.  Some interesting ideas.