U.S. Olympic team demonstrates what it means to be American 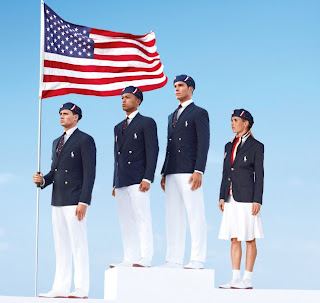 The outfits they will be wearing for the opening and closing ceremonies were made in China.

Some members of Congress are outraged.  Harry Reid (who was probably wearing shoes made in Italy at the time) told reporters - "I think they should take all the uniforms, put them in a big pile and burn them and start all over again."


“Unlike most Olympic teams around the world, the U.S. Olympic Team is privately funded and we’re grateful for the support of our sponsors,” USOC spokesman Patrick Sandusky said in a statement...

When General Motors left as a sponsor, the USOC signed a $24 million deal with German automaker BMW that raised eyebrows. At the time, the USOC highlighted the carmaker’s 42-year history of selling cars in the United States and the fact that BMW has 7,000 American employees.

The USOC and the International Olympic Committee also were criticized for sticking with BP as a sponsor after the deadly oil spills in the Gulf of Mexico.

More at the Washington Post.  Too bad Jon Stewart is off for the summer.  And if for some bizarre reason you want to dress like this yourself...

Outrageously priced, outsourced clothing.  To complete the image they should have deferred payment for it to the next generation.