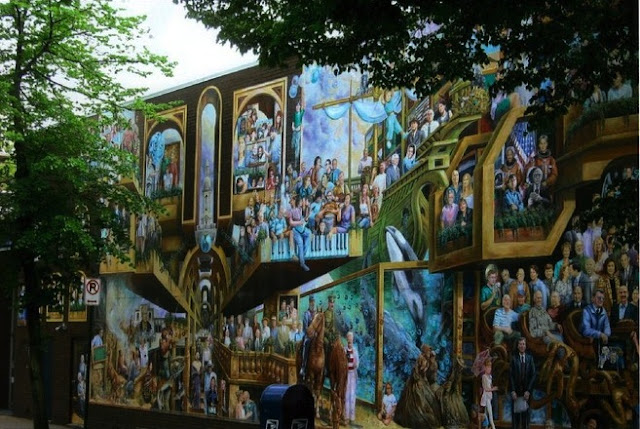 A remarkable piece of public art you'll find in downtown State College is a painted wall mural approximately 100 feet long and 2 two stories tall. The mural entitled, Inspiration" is by mural artist, Michael Pilato. The painting is rather a unique work of art for it features real persons who have a connection to Centre County, Pennsylvania, and has embedded themes. Although the likeness of Coach Joe Paterno of Penn State University is easily recognizable, there are obviously other notable people such as the man holding 3 Olympic medals, a Heismann trophy winner, two soldiers from the Civil War and WWI, etc.

The above description of the Heister Street mural in State College was written years before the recent scandal.  The mural was an ongoing project to which the artist was adding images each year; when someone died, a halo was painted above their head; this year the artist painted over Joe Paterno's halo.


Pilato went on to explain that Sue Paterno has said her husband was never a saint, so he felt that the halo should be removed after the release of the Freeh report. A blue ribbon — symbolizing support for child abuse victims — remains on Paterno’s jacket.

Graham Spanier’s [college president] picture still remains on the mural, much to many viewers’ dismay. Pilato said, though, that he thinks someone else will remove Spanier before he does. People have already thrown eggs at Spanier’s painting.

Text from Onward State.  Image from Associated Press, via PennLive.