I seem to be losing my memory 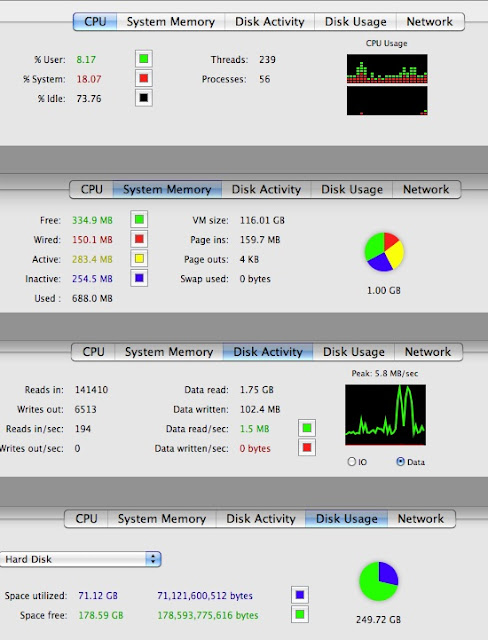 For the past few weeks my blogging has slowed down because my computer has slowed down.  It's gotten to the point now where it's frankly unpleasant to surf the 'net looking for material.  I will probably have to take some time off to get this figured out.

I search for blogworthy material using tabbed browsing on Firefox (14.0.1) on an iMac (2 GHz processor, 1 GB memory, running OSX 10.6.8).  When I turned it on this morning, I looked at the Activity Monitor utility and found the numbers embedded at top.  I don't know if there's anything ominous there, but I do know that as soon as I turn on Firefox and open just one tab, the free System Memory drops from 300+ MB to about 100MB:

And after checking my mail I then open my first set of 12 tabs to check the news of the day, and...

... the memory plunges to 10-20 MB.  I've noticed some sites that seem to slow things down more than most (Salon being the biggest offender for me), but by the time I'm able to get through about eight of the tabs, Firefox is using about 750 MB of memory and is "not responding."   If I go to breakfast and let the iMac sleep, the situation improves...

... but that's only temporary, and pretty soon I'm once again waiting for pages to load or scroll.

I suppose I could have acquired malware somenhow, because I do wander the fringes of the 'net looking for material, but my basic antivirus program hasn't detected anything.  I never used to have problems (visiting the same sites 12 at a time), and I think this has developed after upgrading to Firefox 13 and then 14.  It seems to not "let go" of RAM after I close tabs.  Or perhaps there are some caches somewhere that are full that I don't know about?

It may be that I need to get some new apps to clean up my rather old iMac.  Perhaps I should download OnyX or something equivalent.  I'm dreading digging through my system files, but I'll need to do something to get back on track.  Fortunately I do have some time this weekend, as my invitation to play in The (British) Open seems to have been lost in the mail.  And perhaps I'll use this downtime to do some selling on eBay.

If I don't get this solved this weekend, what I'll probably do is go full "retro" and start posting some of the thousands of bookmarks I've saved over the years but never used, or transcribe some material from magazines like Smithsonian, Harper's, and The Atlantic.

I'm open to suggestions, but wanted to post this for now to let people know the reason for my current absence from the blogosphere.