If you have a clothes washing machine, read this 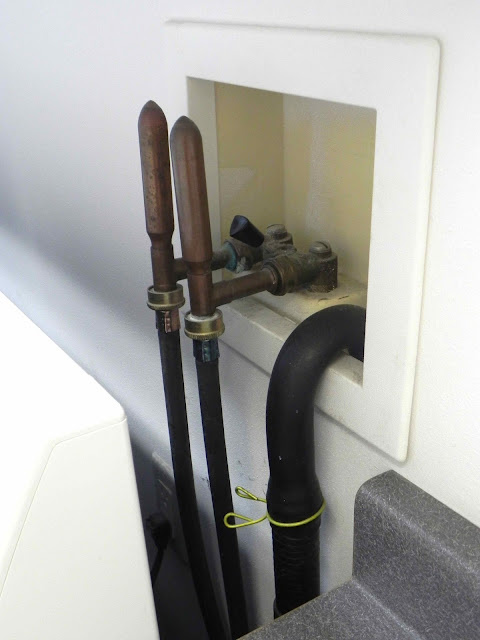 How old are the hoses that connect your clothes washing machine to hot and cold water?  It is a question I had not thought about until reading a column in my favorite home-improvement blog:


Burst washing machine hoses have to be one of the most common causes of catastrophic water damage in homes. When I find rubber hoses used to connect the washing machine, I often mention to my clients that it's a good idea to replace them...

Every time a washing machine shuts off the water, a shockwave is sent through the water pipes... As rubber ages, it loses its flexibility. After being subjected to water hammer over and over for many years, the rubber washing machine hose is eventually going to fail, and it's going to be one heck of a mess...

After reading that, I realized that the hoses to our washer are twelve years old.  I shuddered to realize what would have happened had a hose burst when we were out of the house.  It would be the equivalent of taking a garden hose and leaving it on in the house.

There is an emergency toggle switch (back right in my photo above) that can be used in an emergency - if you're at home.  It's not a bad idea to shut this off when you go away on a trip.  As the link indicates, the washing machine manuals say to shut off the water supply whenever you're not using the washer.  Nobody ever does that.

At the link are other recommendations re automatic-sensing shutoff kits and using stainless-steel flexible hoses.


If you can connect a garden hose to a faucet, you can replace your washing machine hoses.  Just use a wrench to loosen the old hoses, and give the new hoses an extra 1/4 turn with a wrench after you have them hand-tightened.

I'm replacing ours this week.