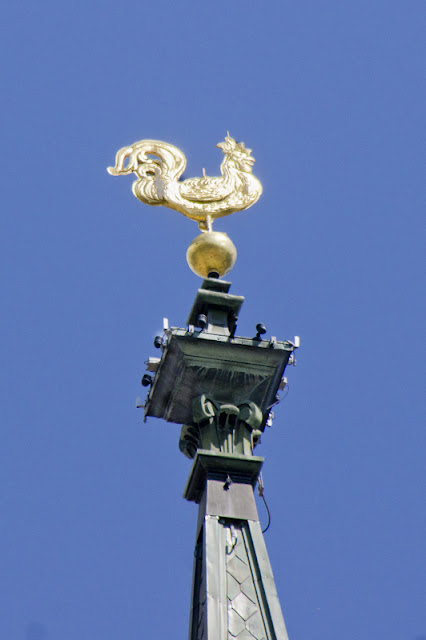 I had never given any thought to the design of weather vanes until encountering this passage while reading my June issue of Smithsonian magazine:


The rooster plays a small but crucial role in the Gospels in helping to fulfill the prophecy that Peter would deny Jesus “before the cock crows.” (In the ninth century, Pope Nicholas I decreed that a figure of a rooster should be placed atop every church as a reminder of the incident—which is why many churches still have cockerel-shaped weather vanes.)

From the Wikipedia entry I found that the word 'vane' comes from the Anglo-Saxon word 'fane' meaning 'flag', which fits in nicely with this observation from an article about the history of weather vanes:


In Britain, Germany, and Normandy lords and noblemen flew banners and flags from castle towers. These flags were not intended to predict the weather, but actually helped archers calculate the direction of the wind when defending the castle. Through the years, the cloth flags were replaced by metal structures.

So that explains why images of castles often show the battlements festooned with flags; I always thought they were just decorative.  You learn something every day.

Here's a segment of the Bayeaux tapestry which depicts a man installing a weather vane (with a cock) on Westminster Abbey, as the corpse of the king is being carried in:

Now back to the Smithsonian article, which focuses on the history of the chicken rather than the history of weather vanes.  It's full of interesting information, including this thought-provoking observation:


Matthew 23:37 contains a passage in which Jesus likens his care for the people of Jerusalem to a hen caring for her brood. This image, had it caught on, could have completely changed the course of Christian iconography, which has been dominated instead by depictions of the Good Shepherd.


O Jerusalem, Jerusalem, thou that killest the prophets, and stonest them which are sent unto thee, how often would I have gathered thy children together, even as a hen gathereth her chickens under her wings, and ye would not!

It makes me wonder how my old church - the Good Shepherd Lutheran Church - might otherwise have been named...

Photo ("on the tower of the protestant Church of St.Moritz") from an excellent collection of pix of weather vanes at Dyxum Photographs.