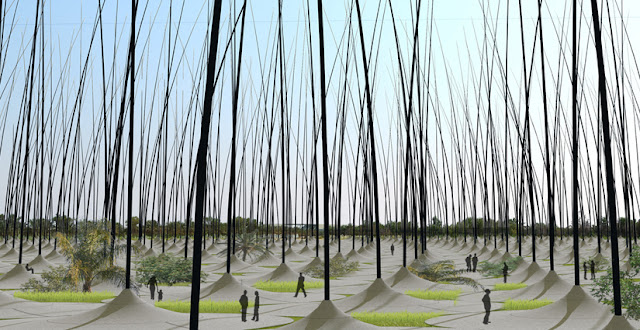 Apparently only at the concept stage now, but one advantage over wind turbines is that it eliminated the rotating blades, with their consequent noise and risk to birds:


New York design firm Atelier DNA has an alternative concept that ditches blades in favor of stalks. Resembling thin cattails, the Windstalks generate electricity when the wind sets them waving...

The proposed design calls for 1,203 "“stalks," each 180-feet high with concrete bases that are between about 33- and 66-feet wide. The carbon-fiber stalks, reinforced with resin, are about a foot wide at the base tapering to about 2 inches at the top. Each stalk will contain alternating layers of electrodes and ceramic discs made from piezoelectric material, which generates a current when put under pressure. In the case of the stalks, the discs will compress as they sway in the wind, creating a charge.