Cultural affiliations of an "ancient American"

Those familiar with the saga of the Kennewick Man will find this news interesting:


A federal court judge in San Francisco granted a temporary restraining order Friday to prevent the University of California, San Diego (UCSD), from handing over 9000-year-old human bones to Native Americans, in the latest twist in an unusual custody battle for two human skeletons that are among the earliest found in the Americas... 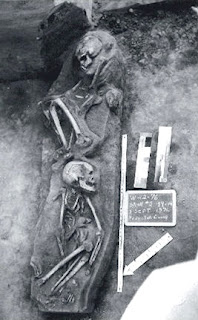 The bones were discovered in 1976 during an excavation at University House in La Jolla, which is the traditional home of the UCSD chancellor. The Kumeyaay, representing 12 federated tribes, have been seeking the remains for reburial, claiming that they were found on their traditional lands. Under the Native American Graves Protection and Repatriation Act, museums and other institutions must repatriate remains and artifacts that can be traced to a tribe. A controversial rule concerning this law, issued in 2010 by the Department of the Interior, gives tribes a way to recover even remains that cannot be linked to specific groups. The new lawsuits may test that rule...

The professors, anthropologist Margaret Schoeninger of UCSD, paleo-anthropologist Robert Bettinger of UC Davis, and paleoanthropologist Tim White of UC Berkeley, filed the lawsuit to block the repatriation, saying that there is no evidence that these bones are related to the Kumeyaay, and in fact, the evidence suggests otherwise. The scientific advisory committee found that the Kumeyaay language moved into the region 2000 years ago, and that the Kumeyaay traditionally cremated their dead rather than burying them. Moreover, Schoeninger's lab's analysis of stable isotopes from samples of the skeletons indicated that they ate a diet of marine mammals and offshore fish—a coastal adaptation that contrasts with the desert origins of the Kumeyaay. Anthropologists who study the bones and DNA of Paleoindians also agree that the remains are probably too old to have any affiliation, cultural or otherwise, with tribes living in southern California today.

The ethics are complicated; I'm not offering an answer - just presenting the problem for consideration.