Here's the backstory (from a photoessay):


In March of 2007, Odyssey was searching the Atlantic sea floor between Portugal and Morocco for several possible shipwreck sites by towing a side-scan sonar and magnetometer array behind the ship. The crew noticed an interesting target that didn’t look like a shipwreck but also didn’t quite look like a natural formation. To identify what had been found, the crew launched the deep-ocean robot (ROV) nick-named ZEUS from their research vessel, the Odyssey Explorer... 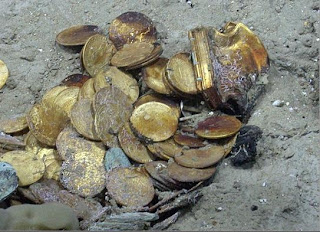 As ZEUS streamed a live video feed to the ship’s control room, the Odyssey crew noticed what appeared to be a pile of coins. A mound of silver coins came into clear view. The team had discovered one of the largest deep-ocean treasures in history. As the team explored the site, hundreds of coin piles came into view, all scattered over a large area of sea bed. Each pile appeared to contain at least 1,000 coins each.

After conducting an archaeological pre-disturbance survey, the team found more artifacts, including gold boxes, copper ingots and many other concretions that could not be identified. Still, there was no way to confirm the identity of the site – in fact there was no actual shipwreck there – just piles of coins and few artifacts spread out over an area the size of six football fields. Odyssey code-named the site “Black Swan”.

Spain insists the site is the remains of the Nuestra Señora de las Mercedes, a Spanish frigate that was carrying up to 30 tons of silver reales when she sank. This coveted treasure has eluded searchers for more than 200 years. Odyssey originally put forth the theory that the cargo could be associated with the Mercedes, but that there is not enough evidence to declare that the site is, in fact, the Mercedes.

Now, after a five-year legal battle, the treasure is being sent to Spain.


Consisting of 18th-century silver coins weighing more than 17 tons, hundreds of gold coins, worked gold and other artifacts, the treasure has been at the center of an acrimonious international legal battle ever since it was discovered.. Valued at as much as $500 million -- the richest shipwreck haul in history...

According to an international maritime law known as the doctrine of sovereign immunity, active-duty naval vessels on a noncommercial mission remain the property of the countries that commissioned them. Spain thus claimed the exclusive property of the wreck and its cargo...

Recently, Odyssey has struck a deal with the British Maritime Heritage Foundation to retrieve an even richer treasure from the depths of the English Channel.

Belonging to the legendary HMS Victory, a warship that sank in 1744 with more than 1,000 men and a secret cargo of gold coins, the shipwreck could produce the world’s richest shipwreck trove, worth $1 billion.

Email ThisBlogThis!Share to TwitterShare to FacebookShare to Pinterest
Labels: treasure