From an article at the Victoria and Albert about how to conserve a book cover made from the shell of a tortoise: 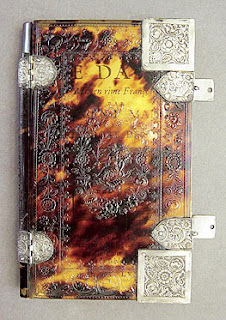 Tortoiseshell is a much admired decorative material derived from certain species of marine turtle, especially the Hawksbill. It is a thermoplastic material and withstands repeated softening by heating and will harden again when cooled. This made it suitable for decoration using heat embossed, block stamp designs such as the floral design on the cover of 'Les Pseaumes de David'.

The photo doesn't supesize, but you can see that the book cover is actually embossed with designs.