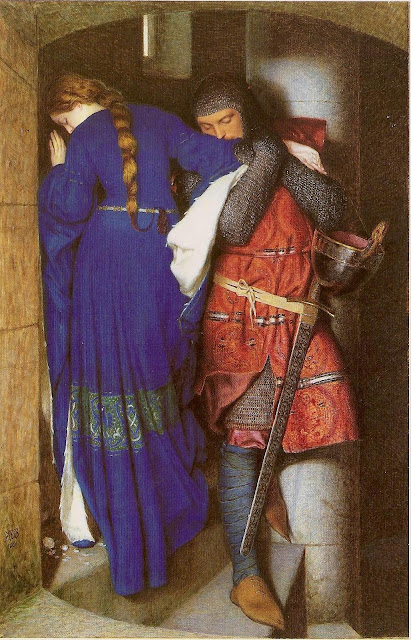 ‘The Meeting on the Turret Stairs’ is one of the better-known works of Frederic William Burton. The theme comes from a medieval Danish ballad which describes how Hellelil fell in love with Hildebrand, Prince of Engelland, one of her twelve personal guards. Her father orders his seven sons to kill him.

They stood at the door with spear and shield:
‘Up Lord Hildebrand! out and yield!’
He kissed me then mine eyes above:-
‘Say never my name, thou darling love’
Out of the door Lord Hildebrand sprang;
Around his head the sword he swang.

Hildebrand kills her father and six brothers before Hellelil intercedes to save the youngest. Hildebrand dies of his wounds and Hellelil herself dies shortly afterwards.

Burton did not choose a violent episode and instead freely interpreted the story, placing their farewell on the turret stairs and leaving the reason for it to the imagination. His invention of the kiss on the woman's outstretched arm and the lack of eye contact adds to the poignancy of the painting.

Explanatory text from the National Gallery of Ireland, via the Clare County Library and the Art Blog.

(BTW - interesting use of "swang" for the past tense.)

Addendum:  A hat tip to "C," who notes that this painting has recently been voted "Ireland's Favorite Painting."


A public vote promoted by RTÉ’s competition to find the nation’s favourite painting over the past five weeks found that the Frederic William Burton piece, which hangs in the National Gallery of Ireland, polled most preferences. One in five of those who voted (22 per cent) went for the romantic 19th century depiction of a young soldier stealing an illicit kiss from his beloved as they pass on a turret stair. Burton was from Corofin, Co Clare.

The other paintings in the competition are posted here.

Addendum #2:  Lots of information about the painting in the Sept/Oct 2012 issue of History Ireland, e.g.:


All the preliminary studies show a medieval tower as the setting for the picture; the direction of the stairs is accurate in being clockwise, like an Irish tower-house, just as the view is correctly taken from a chamber doorway looking towards the stairs. The artist was vigilant about accuracy, incorporating a late medieval loop window made of a narrow vertical slit in the wall, splayed on the interior so that it could be used by archers... The figure of Hellelil draws especial attention, her elongated back view emphasising the costume, with only a glimpse of the face and outstretched arm. The particular shade of deep blue was also used in Burton’s The Child Miranda (1864). The gown appears made of fine wool, with long hanging sleeves fringed in fur, fitted with a tight bodice down to the hips, creating an elegant outline majestically folding into an extremely full skirt, both the sleeves and gown lined in white fur. The decorative girdle about her waist is of a generic late medieval type, its band interspersed with a sequence of bronze buckles, linked so that it could move with ease on the hips. Wound around her golden hair are mauve ribbons that end with the hair woven into a mauve toggle, tucked into the belt...