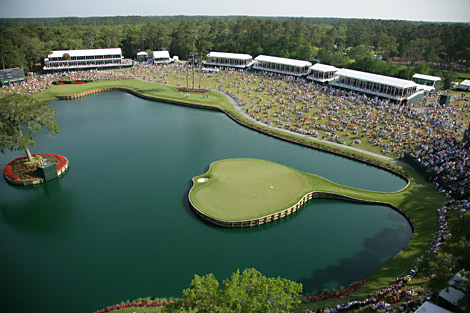 This is the (in)famous "island green" at the 17th hole at TPC Sawgrass (Florida).  A Wall Street Journal article discusses whether this is too "gimmicky" or unfair:


Amateurs pump 120,000 balls a year into a watery grave. Pros competing at the Players Championship have dumped nearly 500 balls into the drink since 2003 alone....

For a hole and a tournament that purports to be serious, you wouldn't think such additional gimmickry would be necessary. Tiger Woods, for one, thinks the 17th hole is already a bit much, at least positioned where it is, as the next-to-last hole of each round. "I think it's a perfect eighth hole or something like that," he said this week. But not great as part of the finishing run, where a single unpredictable gust of wind or surge of adrenaline can cost a player two strokes minimum.

He has a point. It's hard to imagine the U.S. Golf Association allowing the 17th to stand as the penultimate hole at a U.S. Open. It can seem like a made-for-television hole, a novelty act for fans.

When you examine the 17th more closely, however, it's not nearly the carnival act its popularity suggests. None of the three elements that make it so fearsome—the wind, when it blows, the water in your face and the pressure of competition—are what you'd call gimmicks. All are elemental components of the game. The difference is their unique combination, all coming to bear on a single shot. But the hole's length, officially 137 yards but often shorter, keeps the risk-reward ratio in balance...

The approach, btw, is not from the side with the causeway, but from the upper left side of the photo.  More at the link.

Photo via From the Bunker.