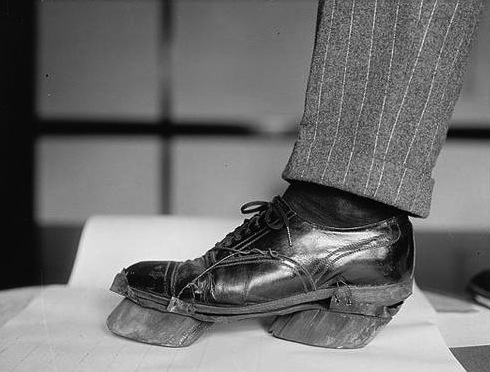 The shoes have been featured at Kottke, BoingBoing, Neatorama, and a dozen more places in recent days, most of which reprint text from a 1922 newspaper article describing a method used by moonshiners to avoid detection:


The cow shoe is a strip of metal to which is tacked a wooden block carved to resemble the hoof of a cow, which may be strapped to the human foot. A man shod with a pair of them would leave a trail resembling that of a cow.
The shoe found was picked up near Port Tampa where a still was located some time ago. It will be sent to the prohibition department at Washington. Officers believe the inventor got his idea from a Sherlock Holmes story in which the villain shod his horse with shoes the imprint of which resembled those of a cow's hoof.

The Holmes story was "The Adventure of the Priory School."  I had to look up the context:


There is one other small point upon which I desire some light. This fellow Hayes had shod his horses with shoes which counterfeited the tracks of cows. Was it from Mr. Wilder that he learned so extraordinary a device?"

The Duke stood in thought for a moment, with a look of intense surprise on his face. Then he opened a door and showed us into a large room furnished as a museum. He led the way to a glass case in a corner, and pointed to the inscription.

"These shoes," it ran, "were dug up in the moat of Holdernesse Hall. They are for the use of horses, but they are shaped below with a cloven foot of iron, so as to throw pursuers off the track. They are supposed to have belonged to some of the marauding Barons of Holdernesse in the Middle Ages."

But while searching that, I found an example of a Holmes deduction that was inaccurate.  This from The Urban Country Bicycle Blog:

The idea that the direction taken by a bicycle can be determined by observing the crossing of the tire tracks was first put forward by Conan Doyle in the Sherlock Holmes story "The Priory School."

The premise was challenged and disproved by his readers almost straight away. The back tire crosses the path of the front the same way no matter which way the bicycle is oriented. The only way to tell which way a bicycle was going by its tracks is to follow them to the bicycle.

Doyle admitted that the idea had come to him as an inspiration while writing the story, rather than by actual observation, and that he had made a rare silly error. It is easy to be fooled into thinking it true by other clues giving a reason to presume the direction, such as which side of the street the tracks are on, or by finding the bicycle.