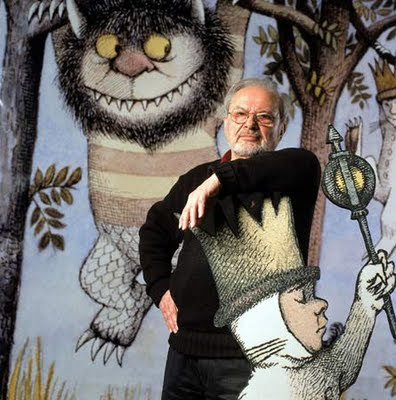 Reporter: "What do you say to parents who think the Wild Things film may be too scary?"
Sendak: "I would tell them to go to hell. That's a question I will not tolerate."
Reporter: "Because kids can handle it?"
Sendak: "If they can't handle it, go home. Or wet your pants. Do whatever you like. But it's not a question that can be answered.... This concentration on kids being scared, as though we as adults can't be scared. Of course we're scared. I'm scared of watching a TV show about vampires. I can't fall asleep. It never stops. We're grown-ups; we know better, but we're afraid."
Reporter: "Why is that important in art?"
Sendak: "Because it's truth. You don't want to do something that's all terrifying. I saw the most horrendous movies that were unfit for child's eyes. So what? I managed to survive."

I distinctly remember seeing Welles' War of the Worlds as a child; during the scene in the farmhouse when the head enters the basement I watched the movie from the floor, peering between the backs of the seats in the row ahead of me. It probably helped contribute to my development as an adult in some convoluted way...

More details re the Sendak comment and a (very) long discussion thread at the San Francisco Chronicle's SFGate. Via Fark.