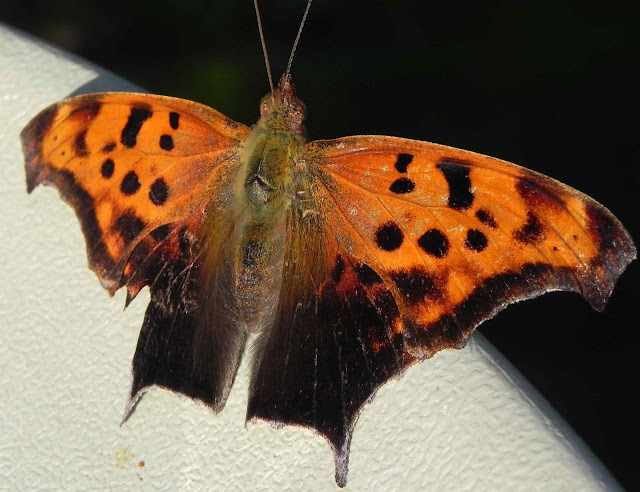 There are two North American butterflies that are named after punctuation marks.  Shown above is the Question Mark, whose scientific name is Polygonia (from Greek many + angles, referring to the shape of the wings) interrogationis (you can figure that one out).

It's fairly common through all of the eastern U.S. to the Rocky Mountains because its caterpillars can feed on a wide variety of host plants, including elm trees and nettles, and it is easy to spot because of the brilliant orange color topside.  It shows up early in the spring because it is capable of overwintering, and as an early spring flyer it has evolved to feed on energy sources other than flower nectar, including tree sap, carrion, dung, and rotting fruit.  I photographed the one above on a birdbath where I had placed an overripe banana. From above it is almost indistinguishable from its cousin, the Comma.  Butterfly enthusiasts can spot the difference: the "field mark" is one extra black dot ("dash") on the dorsal surface of the forewing (highlighted at the insert).

A better distinguishing feature, when you can see it, is the "question mark" itself.  Question Marks and Commas (of which there are several kinds) all have a white mark resembling the Nike "swoosh" on the undersurface of the hindwing.  The Commas have simple curves, while the Question Marks add a variable dot which at best forms a true question mark, and at worst just distorts the shape of the comma.  Below are two Question Marks (also feeding on the banana in my feeder) showing their diagnostic marks. 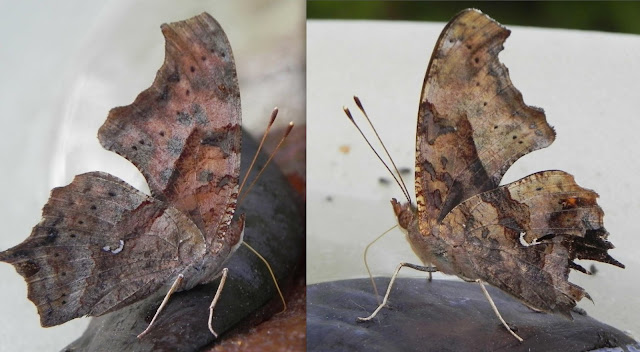 You can also see how the "anglewing" is more apparent, and how it would serve to enhance the camouflage when the butterfly rests on tree bark or other organic matter.