This is a sarcastic fringehead - updated with video 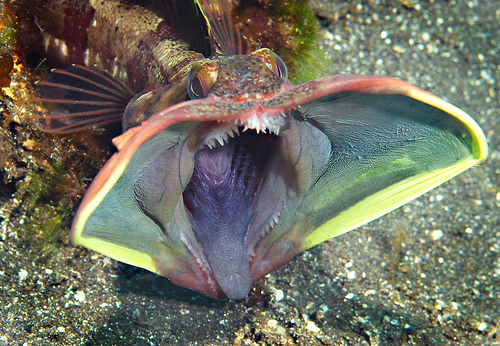 "...a ferocious fish which has a large mouth and aggressive territorial behaviour. They can be up to 30 centimetres (12 in) wide and are mostly scaleless with great pectoral fins and reduced pelvic fins. With highly compressed bodies, some may be so widened as to appear eel-like. They tend to hide inside shells or crevices. After the female spawns under a rock or in clam burrows the male guards the eggs. They are found in the Pacific, off the coast of North America, from San Francisco, California, to central Baja California and their depth range is from 3 to 73 metres (9.8 to 240 ft)."

What a name (scientifically, it is Neoclinus Blanchardi).  What an impressive mouth.  More information here.

Via Aquatic Adventures and A London Salmagundi.

Addendum:  A bit hat tip to an anonymous reader who provided the link for this David Attenborough narration about the sarcastic fringehead.  It's worth the three minutes:

The cynic in me thinks it wasn't a lucky coincidence that those two inhabited shells at the end happened to be so close together - but it does make for some impressive video.