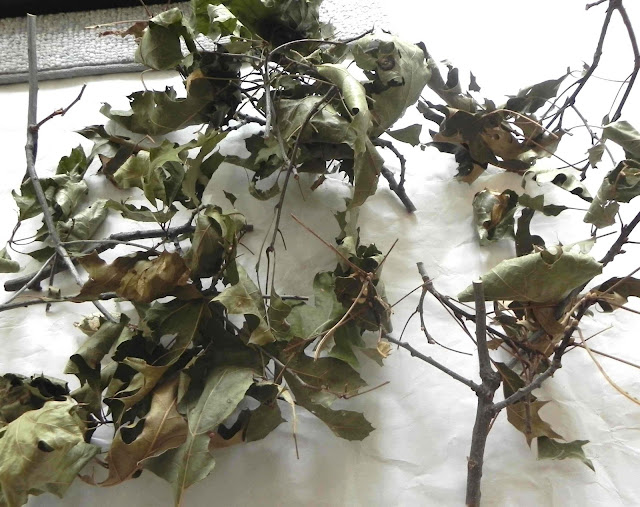 Last week I received an email from a good friend and fellow lepidoptera enthusiast, who asked if I would like to  have some cocoons of the Polyphemus moth.  I hesitated only a few milliseconds before replying in the affirmative, and several hours later was at her home, where she presented me with a grocery bag whose contents are depicted above, spread out on paper on our dining-area table.

Last summer my friend had raised Polyphemus caterpillars; in the autumn they had pupated by spinning cocoons amid the oak leaves they were feeding on.  The cocoons are well camouflaged and are not easy to see in the photo above, but here's a good example - 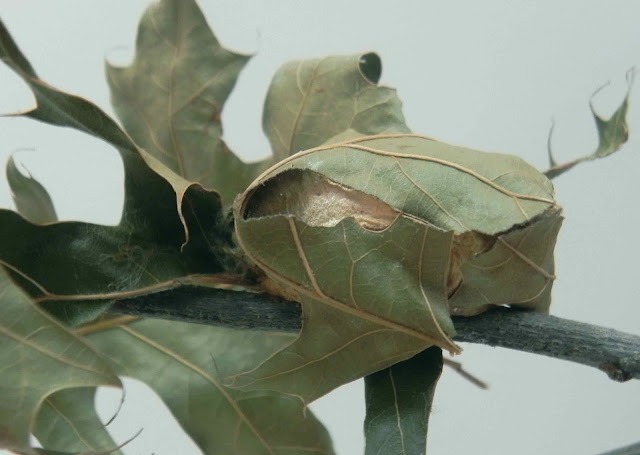 The caterpillars pull some oak leaves together, then spin the cocoon.  They overwintered during sub-zero days here in Wisconsin, and during this mid-spring day began their eclosion (emergence).  I didn't photograph the process, because unlike with butterflies I couldn't tell when it would happen.

The cocoon is surprisingly firm, since the silk is glued together with a material that hardens; to get out, the adult moth secretes a digestive enzyme that melts a hole in the tip of the cocoon.  The moth emerges in a "compressed" form with the wings tiny.  He/she then seeks a surface from which to hang while the wings are inflated.  This one is somehow managing to climb a plastic sheet (!) and is shown from the back - 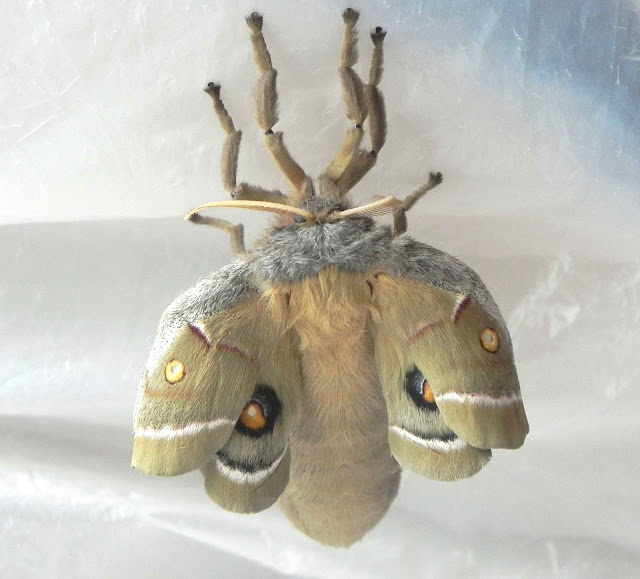 - and from the side.  From the lateral view you can see the distended abdomen which contains the body fluids that are pumped into the wings for inflation and which in the female contain the hundreds of eggs (already formed) which she will oviposit as soon as a male  fertilizes them. 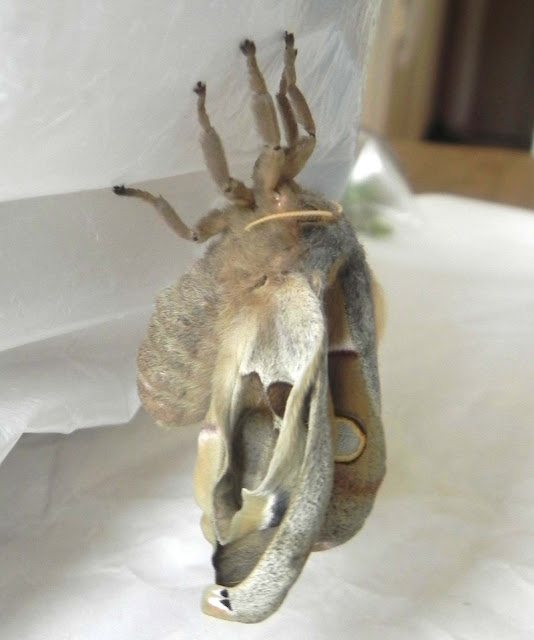 I didn't want to disturb the moth at this point in the process.  The others I moved to a terrarium, where this one emerged and clung to an oak twig during this process. 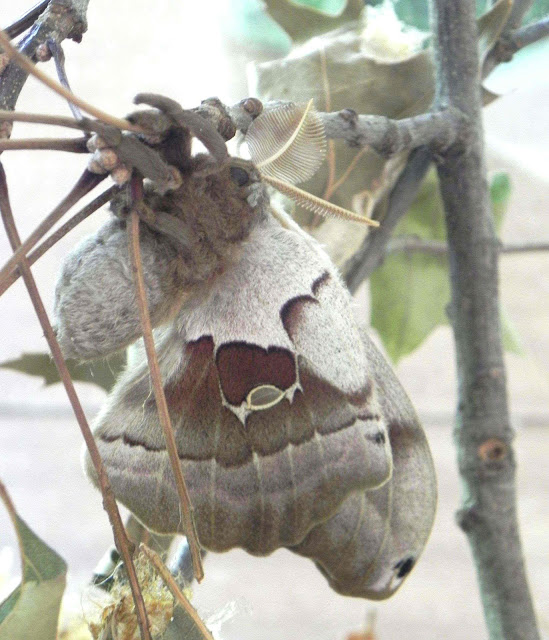 The end  result is an absolutely gorgeous creature - and a huge one (for an insect).  I didn't think to take a photo with one on my hand, but if I had, the wingspan would have covered my palm.  The one pictured below is resting on the railing of our screen porch, which is where we kept them while they emerged. This one is a male, identifiable by the elaborate structure of the antennae, which he uses to detect pheromones released by the females.

This view is particularly interesting because it shows that the four "spots" on the wings are actually translucent membranes.  I'm not sure if that translucency offers any functional advantage, but the large spots on the hindwing are presumed by humans to serve as false "eyes" to startle or confuse potential predators. 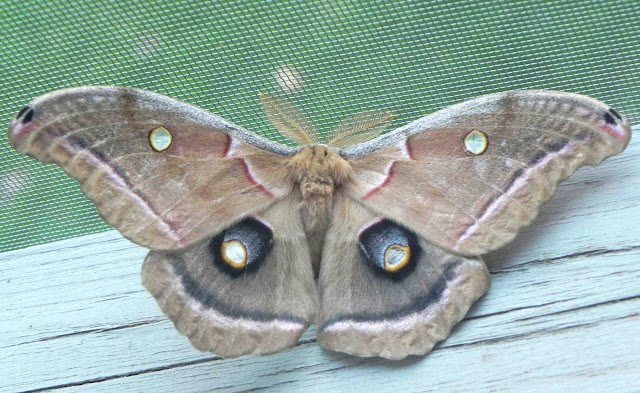 Here's another freshly-emerged moth (I think a female with smaller antennae), resting on the carpet of the screen porch. 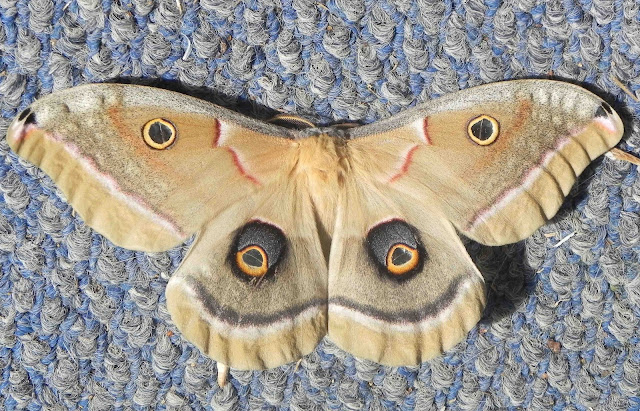 The morning after the first ones emerged, I took one across the street to show to neighbor children, who were enthralled.  They took turns holding the giant silkmoth in their hands (it took two flattened child-size hands to hold one).  As we talked about the moths (and how they have no mouthparts and thus cannot feed and will die in a couple days), the sun warmed the moth they were holding, and after a few prelimary flaps on their hands it gradually lifted itself into the air, then circled us at a low altitude, then soared over a housetop seeking a resting place until it would be time for its nocturnal search for a mate.

The name Polyphemus was applied to these moths in reference to a character from Greek mythology.  The legendary Polyphemus was a giant, a son of Poseidon, who had one eye and was one of the Cyclopes.

For more on the legend of the Cyclops, scroll down to the next post, or click here.

And for a discussion of how to retrieve the silk from the moth cocoons, keep scrolling, or click here.