Inventing the wheel - it's not as easy as it seems 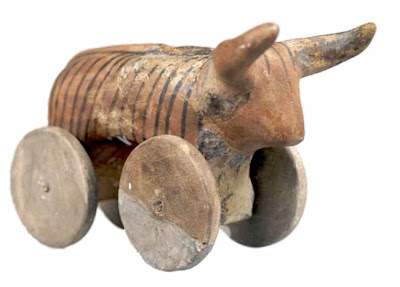 The invention of the wheel is the subject of innumerable humorous cartoons.  What surprises many people is that no one in the ancient New World invented the wheel.  When Europeans arrived, there were no wheeled vehicles in North or South America.

And it wasn't just an American deficiency:


The fact is that most civilizations in the Old World didn't invent the wheel either--instead, they borrowed it from some other culture. The wheel appears to have been first used in Sumer in the Middle East around 3500 BC, whence it spread across Europe, Asia, and North Africa. It didn't arrive in Britain until 500 BC.

An article in Scientific American points out that the problem isn't with designing a wheel (which was done in neolithic times for what appear to be children's toys).  The problem was designing an axle:


The success of the whole structure was extremely sensitive to the size of the axle. While a narrow one would reduce the amount of friction, it would also be too weak to support a load. Meanwhile, a thick axle would hugely increase the amount of friction. "They solved this problem by making the earliest wagons quite narrow, so they could have short axles, which made it possible to have an axle that wasn't very thick..."

The sensitivity of the wheel-and-axle system to all these factors meant that it could not have been developed in phases, he said. It was an all-or-nothing structure...

The invention of the wheel was so challenging that it probably happened only once, in one place. However, from that place, it seems to have spread so rapidly across Eurasia and the Middle East that experts cannot say for sure where it originated. The earliest images of wheeled carts have been excavated in Poland and elsewhere in the Eurasian steppes, and this region is overtaking Mesopotamia (present-day Iraq) as the wheel's most likely birthplace.

More at the link.  See also my previous posts on prehistoric wheeled transportation and neolithic pull-toys.